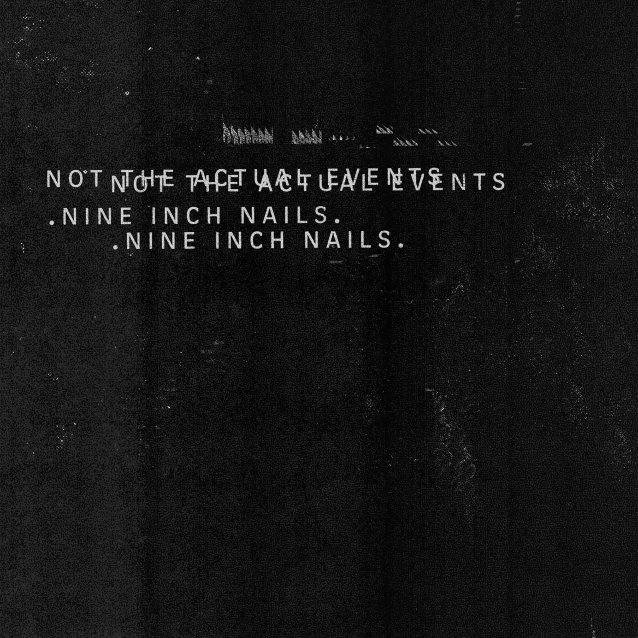 As hinted at earlier this year, Nine Inch Nails will be releasing new music before the end of 2016.

The brand new five track EP, Not The Actual Events, comes in two formats. Both of which feature the digital download, available 12:01am PST on Friday December 23. The first is 180g single-sided vinyl, and the second is a unique limited physical component version.

According to the band, “the intention of this record is for it to exist in the physical world, just like you... we will ship the proper physical component to your house for you to deal with, while very limited supplies last.” The physical component will be dispatched in January, with the vinyl following in the spring.

NiN’s mainman Trent Reznor has made long-time collaborator, and fellow Oscar recipient, Atticus Ross a full member of the group. It’s the first time anyone other then Reznor has officially been part of Nine Inch Nails.

The self-released EP is “an unfriendly, fairly impenetrable record that we needed to make” says Reznor. “It’s an EP because that ended up being the proper length to tell that story.”

Interestingly, Reznor is reissuing the band’s back catalogue on vinyl. The albums have been remastered and The Fragile includes extensive bonus material from himself and Ross. Together with the physical aspects of the new EP, he has posted a “Vinyl Mission Statement” on the NiN website.

The man who is Chief Creative Officer at Apple Music feels that “digital formats and streaming are great and certainly convenient, but the ideal way I’d hope a listener experience my music is to grab a great set of headphones, sit with the vinyl, drop the needle, hold the jacket in your hands looking at the artwork (with your fucking phone turned off) and go on a journey with me.

The canvas of artwork, the weight of the record, the smell of the vinyl, the dropping of the needle, the difficulty of skipping tracks, the changing of sides, the secrets hidden within, and having a physical object that exists in the real world with you… all part of the experience and magic.”

The EP and vinyl reissues are available from http://hyperurl.co/ninstore.

More in this category: « First Acts Released For Indiependence 2017 Inspiral Carpets Saturn 5 For Christmas #1 »
Login to post comments
back to top