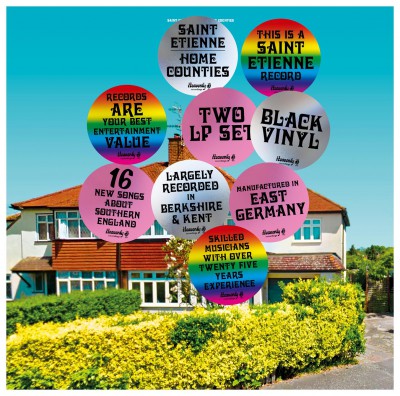 What is it about Saint Etienne that makes me think of long drawn out sunny Sunday afternoons? Fancy something light and airy, a backdrop to the sunshine? Their music is made for moments such as these.

Listening to Home Counties feels like looking at a group of people; let’s say at a garden party. Imagine the scene peopled with characters you can expect to bump into on a packed out commuter train to London - a frazzled, shell shocked mother of two under five, that Barbour jacketed guy loitering outside a high-end food shop, or that couple you met that one time at a quiz night in the local pub.

So, without further ado, drink in hand (Victorian Lemonade if you’re driving home after or Peroni if you’re not) let’s get this shindig started.

‘Something New’ eases you nicely into the mix, so clearly them, it’s like seeing a likable acquaintance across the moulded plastic furniture scattered lawn. With 'Magpie Eyes' I was dropped off somewhere in the '80s and thought I spied Molly Ringwald’s flaming red hair and scowl a la Breakfast Club. For a while you’re floating, until 'Dive' hits; it’ll get you shaking. Sexy guitars are funking up the place and you can’t help but move it. Careful love, or you’ll spill your drink.

The music floats around the decades. Funk? Disco? I’m a child of the '80s and am picking up tones of…Wait. Did I say decades? Scratch that. This takes in the breadth of centuries when that choir and harp enter in ‘Church Pew Furniture Restorer.’

Compared to some of their previous offerings, there are juicier bits in here, something to grab on to instead of the kind of tunes that drift on by, hardly noticed. It’s odd as you can’t quite figure out where this party is going to take you. In some way, you feel you are led to snootily look down your nose on the people here, yet there is sympathy in the observations. It’s easy to get into their heads, especially in ‘Take It All In’ which gently asks you to look at the long view and the beauty around you, when life has done that ugly thing of not turning out as you had hoped it might. The album carries on much the same, quick introductions, then you turn around and eavesdrop on another guest who has just entered the scene.

Saint Etienne have taken their previous examples of writing people into song and have built up this entire album around a cast of plausible characters. They certainly like their snapshots of everyday people getting on with the business of living. There is something rather comforting about these observations and the music soundtracking this scene evoked.

More in this category: « Matthew O'Neill - Trophic Cascade Napoleon IIIrd - The Great Lake »
Login to post comments
back to top