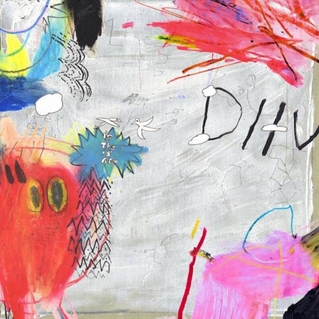 Vocals. That's the first thing you notice about Is The Is Are, after the guitar line of 'Out Of Mind' has reeled you in. 2012 debut Oshin could for the most part have you thinking it was an instrumental album, so far back in the mix and overwashed with all the classic shoegaze elements was Zachary Cole Smith's singing. Here though they're much more distinct.

Secondly this is a double album (a moot point if you're downloading it) so you've 17 tracks at your disposal (okay, 16 as number 12 '(Fuck)' is a rather pointless 17 second episode). And yeah, no need to worry about a drop in form in the intervening four years. Stylistically it's safe to say that Smith and co. have developed in the way you'd have hoped for, in line with the greats of the first shoegaze boom - there's those vocals, more musical expansiveness, Sonic Youth-like tracks with a female singer ('Blue Boredom (Sky's Song)', 'Mire (Grant's Song)') which bring a greater depth to the whole work and yet the overall DIIVness is really unchanged.

There's also no peaks and troughs through the course of the record, a potential issue given the number of songs. Riven with nifty guitar hooks and conducted at a pace suitable to have a good run to, if that's your sort of thing, it's very hard to see how anything other than total amnesia will prevent this from being in the top ten lists of publications that bother with those come the end of the year. In terms more meaningful it deserves your purchasing it very much right now.

With this and the Sunflower Bean album coming out at the same time, Brooklyn-based indie bands are currently leading the way in what will hopefully prove to be a far more memorable year for such music than 2015 was. Could it be Brooklyn vs. Leeds as the year progresses?

Is The Is Are is available from amazon & iTunes.