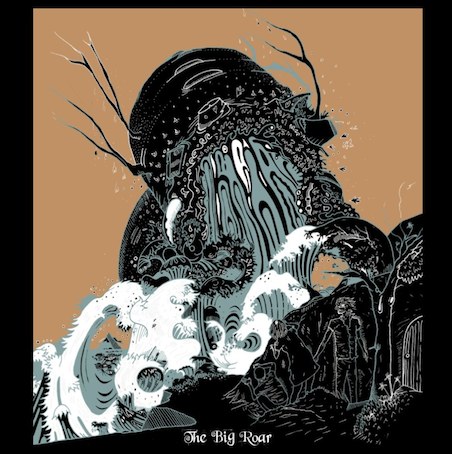 I have been waiting for The Joy Formidable’s debut album for about three years. Well, actually, that isn’t strictly accurate. As it turns out, I’ve been waiting for around half of The Joy Formidable’s debut album for about three years. You see, a sizeable proportion of The Big Roar’s songs have been kicking around for a good while now, with four of them reappearing after originally featuring on mini-album A Balloon Called Moaning a couple of years ago. But hey, let’s not get too precious about the band’s decision to recycle old work, because I guess the usual purpose of a debut album is to represent a compilation of an artist’s best work from their inception to the record’s production. A more relevant query is just exactly why it has taken so long for the album to arrive when The Joy Formidable have been featuring on ‘Ones to Watch’ lists since 2008.

For the most part (and I’m genuinely pleased to say this, having developed a growing soft spot for the band with each single release that has gone by), The Big Roar has been worth the wait. It is an impressive showcase of the twin cores of The Joy Formidable’s sound, blending urgent ballsy rock-outs with dreamy grunge blissfests. This is illustrated very neatly indeed by the opening one-two of ‘The Everchanging Spectrum of a Lie’ and ‘The Magnifying Glass’, with the former showering us in wave after wave of ecstatic guitar fuzz, and the latter pulling off a wonderful Nirvana-esque directness of the kind that Feeder used to think they were good at.

One of The Joy Formidable’s strongest assets has always been frontwoman Ritzy Bryan’s voice. It’s something which they have utilised to its fullest potential here, safe in the knowledge that it is strong enough to hold out even under the pressure of the heaviest squall of guitars they can muster. Her seductive, throaty (and exceedingly Welsh) vocals work interact beautifully with the noisiness, never more than on ‘A Heavy Abacus’ or ‘Cradle’. Indeed, so beguiling can Ritzy’s vocals be that it’s slightly jarring when she briefly secedes control of the mic to bassist Rhydian Daffydd on ‘Llaw=Wall’. He’s perfectly capable, and his cameo perhaps offers a little breathing space from Ritzy’s voice, but it’s kind of like when James Hanna sings on Asobi Seksu songs, they just don’t sound like quite the same band.

The Big Roar may not be perfect ('Whirring' wanders away into guitar-mashing rambling for about two minutes longer than it has to, and 'Maruyama' isn’t entirely necessary), but there’s a hell of a lot about it to admire. There’s little indication that the songs have been written across of period in excess of three years, because the oldies sit perfectly comfortably alongside the newer songs, with the big positive of the lengthy gestation period being that it allows the band to display more progression than is usually possible in the span of one record.

As time has gone on, they have sharply honed their sound, developing it into something which not many bands are doing right now, (certainly not this well anyway). Yes, their shoegaze/grunge influences are displayed fairly nakedly, but what they are doing is still entirely their own. However, probably the most impressive thing the band have managed with The Big Roar is to have struck up a convincing blend of proper arse-kicking rock and something which is enriching and engaging. It’s a really strong debut album which shows room to grow, and give us good cause to be excited about what the future holds for The Joy Formidable.

Rate this item
(0 votes)
Tweet
More in this category: « James Blake - James Blake The Streets - Computers And Blues »
Login to post comments
back to top