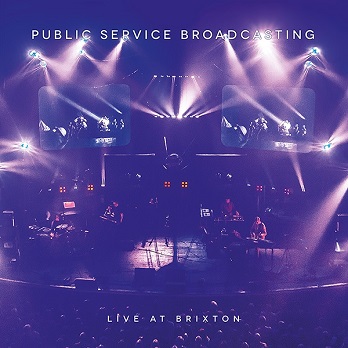 After missing Public Service Broadcasting twice in Glasgow, once in Edinburgh, and after opting not to go to their show at the National Space Centre, I was getting disappointed with my track record seeing this band, a band whose music I was in awe at. When their largest headline date to date was announced in London, I was in Barcelona for a few months studying, and whilst I did look up flights to attend sense eventually prevailed.

Watching and listening to Live At Brixton therefore helps to reduce my sadness whilst waiting for their return to Glasgow, although as a service announcement of my own I should probably let you know that the previous two CD/DVD live albums I enjoyed were Green Day’s Bullet In A Bible and Linkin Park’s Live In Texas, so you know what to expect from this review.

In its entirety, the seventeen-track set played that night spans the band’s career so far, drawing tracks from both albums and their original war-themed EP. Opening like the most recent album The Race For Space, Kennedy’s inspiring words fade in to the bleep of Sputnik, as a large model of that first satellite graces centre stage for the whole performance with dazzling lights. If you’ve seen the band live, you’ll know about their usual audio-visual stage arrangement and novel method of crowd interaction, so I’ll leave that for your enjoyment later, rather than spoiling the whole thing.

Next is a run of older tracks, featuring the incendiary ‘Signal 30’ and soaring ‘Night Mail’, both obvious crowd favourites as the “drop” in both kicks them into some vigorous dancing. Existing as a duo usually, the wealth of additional personnel involved in making this show the breathtaking spectacle it is is impressive. From the usual brass accompaniment to backing singers to string arrangements… all crammed onto the Brixton Academy stage for maximum musical impact.

After some shy words from one half of the band – J. Willgoose, Esq. – the crowd is introduced to the “voice of Public Service Broadcasting”, and then a triumphant end to the set begins… with five tracks left. The enthralling ‘The Other Side’ kicks things off, with the closing duo of ‘Gagarin’ and ‘Everest’ seeing the emergence of shiny jacket and some killer dance moves.

Confetti cannons bring proceedings to a close, and this show is a deserved triumph for the band whose two albums have been generously received by fans and critics alike. A euphoric night of celebration if ever there was one, immortalised forever in a live album, to be enjoy and relived by fans – and even the band if they were so inclined – time and time again. Public Service Broadcasting’s music and performances are a spectacle, and this show is no exception, with the air of celebration giving these recordings an edge over their original, record-forming counterparts.

Live at Brixton is available from iTunes and Amazon.