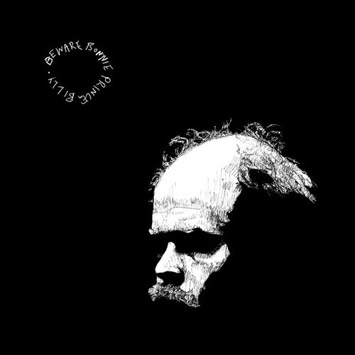 Will Oldham continues his yearly schedule of releasing a record with Beware, an album that sees him further away than ever from the sombre brilliance of I See a Darkness into something which is frankly, a bit of a joke.

The first few tracks are as confusing to us as they must have been for the backing instrumentalists who can't make up their mind whether to go full pelt with a barn dancing country sound or whether to follow Oldham's lyrics which here seem to be equally as absurd. Oldham just sounds like a stalker when he states worryingly in the opening track that "I want to be your only friend.." to which his backing vocalists ask by shrieking "Is that scary?" .In answer to that, yes, yes it is.

Oldham has always showed the darker side of the human soul in his lyrics with real finesse and sensitivity, here he seems to have simply slipped into that darker side and become a creepy old guy who lives down your road and offers you Werther's Originals even though he knows you don't like them. The tracks seem to 'big' and cluttered. Most could do with ending a verse or two sooner and are over-ambitious for an artist whose real acclaim comes from the simplicity of his journeys into sensitive and often avoided subjects such as depression and so on. Instead we get lines such as that in the track 'Death Final' that are unrelated to anything and are emotive for no apparent reason: "In the pit of bodies/I am loved by all"Â  What Oldham seems to be wanting to say here is beyond us and the point is wildly missed.

His lyrics also come across as very naive for a man with so much great material behind him and with the life-experience that age brings to draw on, an example being in 'You Don't Love Me' with "I wanted a woman who loves who I am and what I do/Then I met you" - excusable for a guy in his twenties but not here I'm afraid. The highlight of the album is definitely 'I Am Goodbye' which is simply a good country song with a nice melody and clean, uncluttered lyrics - "I am goodbye/Like the end of something wonderful sometimes/Like the way a wind-up toy dog unwinds." This is Oldham successfully having fun with his music and is sadly not replicated throughout the rest of the record.

Beware is perhaps Will Oldham's worst record; it flies in the face of everything that is great about Bonnie Prince Billy. It's cluttered and protracted musically and lyrically awful, comparatively speaking. Every artist has the right to change direction of course, but not if the results are similar to this Oldham should take a year out and do some serious thinking before his next one.