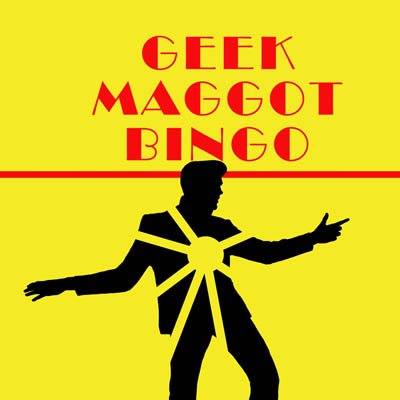 Thankfully there's a digital version online of the latest six-track release from Edinburgh's Geek Maggot Bingo, otherwise I'd have been unable to play it, having not owned a cassette player/tape deck/whatever for the past 20+ years. So much for technological advances, what does it sound like?

With each new release the band seem to channel more and more of the best bits of The Reverend Horton Heat (not in any way a bad thing). The title track here is a prime example of that as it pounds away for just over two minutes, Andy Maggot rawly vocalising all the way & bringing to mind the good Reverend.

'Hey Jackass' turns the pace down a notch but has the compensations of a harmonica & a guitar solo as the titular jackass is called out.

Third track 'I'll Still Be Here' is the triumphant soundtrack to one man's resilience against whatever the world has to throw against him & his firm belief in outlasting all who've ever wronged him.

The second half of the release continues on in the same vein as you'd expect (you'll need to shell out if you want to know how the songs go down though, no more spoon feeding). Of the band's releases to date I'll say this is the one which has had the biggest impact on me. Whether it's the production bringing out more of their sound, better quality writing or some other factor they've seemingly ascended to a new level with Box 36.

Box 36 can be purchased from bandcamp here.