Today, in our Franklin Fest 2017 special, step up Spencer Envoy of MFC Chicken and Gastronauts fame.

DS: Welcome Spencer. For those who aren't in the know, please could you give a little history of how the band met, and your musical background..

SE: The band started when I moved from Canada to the UK 7 years ago. I put the word out that I wanted to put together a group to play music inspired by '50s rhythm and blues and the '60s Pacific Northwest sound of The Sonics and The Wailers, and through the miracle of modern technology (Gumtree) I found a group of like minded individuals. We started rehearsing above a former fried chicken shop on Holloway Road, that's where we got the name.

DS: Okay, and what attracted you to that particular kind of music, was it something you discovered as a teenager? Can you remember what particular tunes were the turning point for you?

SE: As a teenager in the early 2000s I was really inspired by the so-called "garage rock revival", with bands like The White Stripes and, particularly, The Hives. I loved that high energy rock and roll sound and that's what made me want to be in a band. The first song I learned was 'Hate to Say I Told You So'. Then I basically traced their influences back to The Sonics, hearing their version of 'Have Love Will Travel' blew my mind and I understood then where The Hives etc. were coming from. Then it's logical to go back from there to Little Richard and Chuck Berry and that primal, exciting, fun sound always felt like the way to go for me.

DS: Fantastic! Was MFC Chicken your first band? I can definitely hear the influences you mentioned, The Sonics, The Wailers, and just good old fashioned Rock 'n' Roll.

SE: My first band was called The Xyphoid Process, back in high school. We played Hives, White Stripes, Ramones, Sex Pistols and Kinks stuff, as well as original material in that vein. I just sang in that band. Then I had a band called the Vestaloynes at college, moving in a more Sonics-styled direction...then I started playing sax, and MFC Chicken was the first band in which I considered myself equally a sax player and singer. 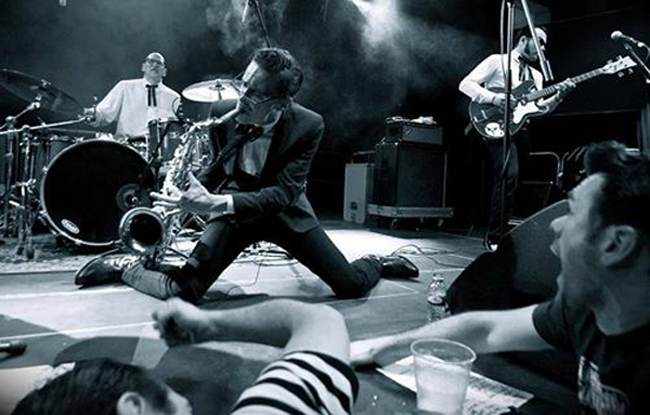 DS: ..and where does that voice come from?!

SE: Some people seemed surprised at my voice, I think my voice might not quite match my appearance. Maybe it sounds like it comes from a larger, older dude. I'm okay with that.

DS: Your voice is pretty astounding I have to say. When I first heard MFC Chicken I was like, oh my goodness, this guy sounds like Gerry Roslie! Enough of the flattery, haha!

SE: Well getting a Gerry Roslie comparison is the highest compliment, so I'll take it!

DS: I saw you at last year's Franklin Fest with The Gastronauts. That was so much fun, did you enjoy doing it, and do you plan to record?

SE: Yeah, that Gastronauts gig was one of the most amusing shows that I can recall playing. It actually started as a food-themed recording project that Angus McPake and I conceived of, so there are already a trove of recordings that may well be released in some form or another in the future. We'll see!

DS: I look forward to hearing that. So turning to this year's Franklin Fest... MFC Chicken doing the songs of The Wailers. It's almost too exciting!

SE: Yes it's something I've been excited about as well! The Wailers are obviously one of our major influences, so it's a natural fit I think. We'll cover the whole breadth of The Wailers catalogue from The Fabulous Wailers LP until the mid 60's Etiquette singles. Hopefully we'll hit all the fan favourites and more, and this will be the only chance to hear us doing this special Wailers set, so come check it out! We even have special outfits for the show.

DS: Cool, I can’t wait to see you guys play. Lastly, could you please describe the Franklin Rock ‘n’ Roll Club for those who haven't been before?

SE: The Franklin has to be the most fun you can have in a cricket club. I think it must be experienced to be fully understood.

Infinite thanks to Spencer for taking the time out if his busy schedule to chat. You can catch MFC Chicken at a venue near you, details can be found on their Facebook page here and don't miss them performing the songs of The Wailers on Friday 30th June, tickets for this gig can be found here.