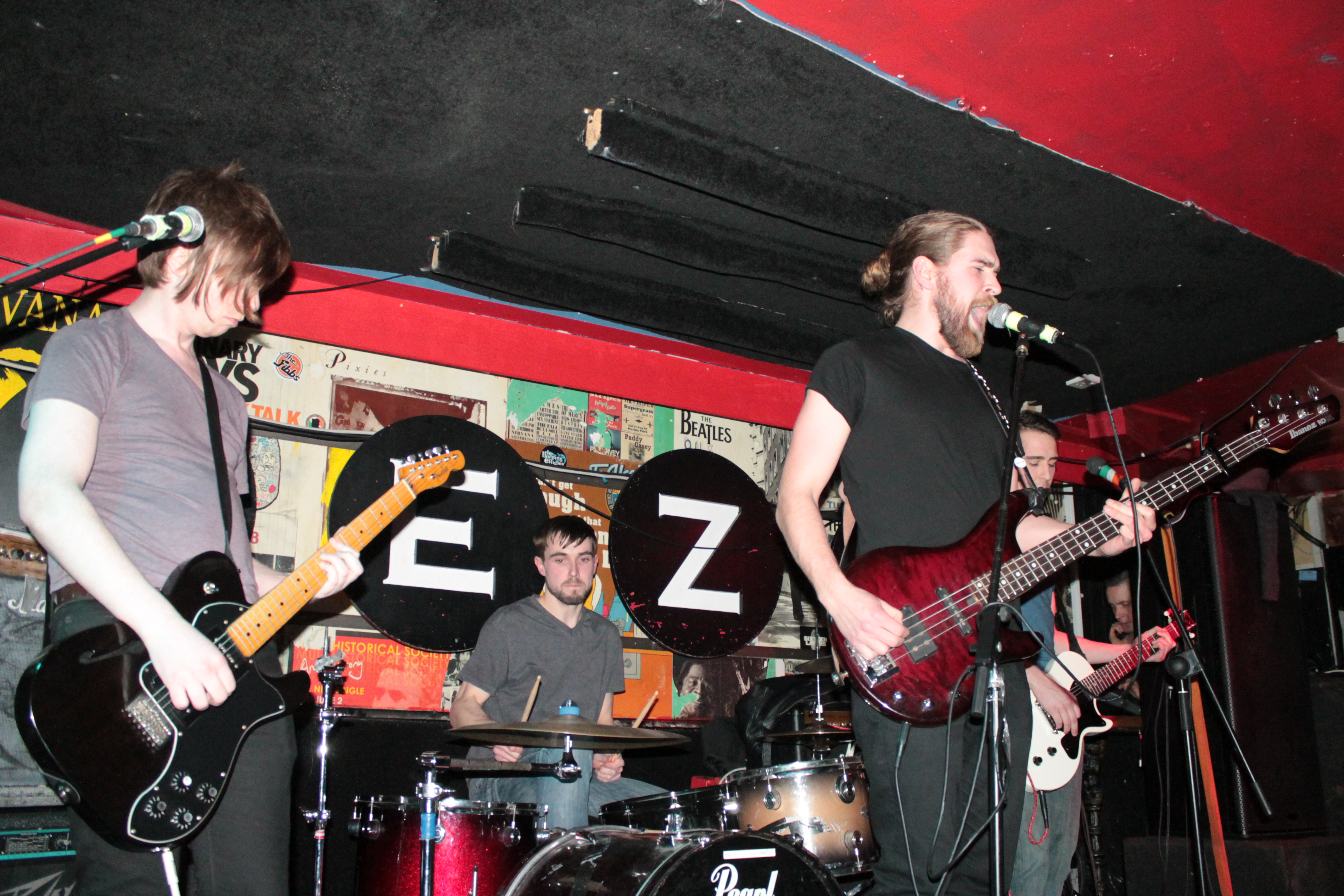 Fibbers’ downstairs venue has changed since our last visit. A new bar and new furniture, but not only that; the famous dank has gone, and with it the pungent aroma that Dublin’s rock community associate with their wasted youth. Gone too is the nu-metal background noise, replaced by some freaky funk. It's a trade-off that divides opinion but if it means more gigs with bands of this quality in the middle of the week, then it'll be worth it. Tonight is a Dublin stoner rock special with Screaming Giants, Slouch and Nervvs.

First up are Nervvs. It's the first we've heard of this band. The burgeoning stoner scene is a shot in the arm in an increasingly slick and conventional Dublin rock scene; heavy and tuneful, it’s easy to see why it appeals. The two-piece have a similar setup to The Bonnevilles or The Black Keys but are trashier and thrashier, with an emphasis more on rock than blues. With the frontman alternating between singing and screaming while the drums reverberate and roll like an ocean current, Nervvs are an invigorating and confrontational proposition.

We lose sight of the band in the fug of the smoke machine but the relentless pounding and churning of the instruments and the screaming refrains are impossible to miss. A new song, ‘You’re Fired’, has a Fugazi feel, sans the dub bass guitar. Nervvs really get the blood pumping and, suitably enlivened, it's time for Slouch.

The Slouch Corporation roll in like they own the place. The trio manage to get tuned up before the artificial smoke envelops them. They open with new instrumental ‘I Want The Gold’. The heavy groove lets everyone know what they are in for. Singer and guitarist Conor Wilson asks if it ok to turn his guitar up. With this music, the louder the better.

When he begins to sing it is a surprise. You expect screaming and shouting but Wilson is more Rivers Cuomo than Kurt Cobain. Their hefty, precise riffing complements the infectious melodies. The tempo varies from a gentle sway to neck-snapping staccato jams, often within the same song.

They use tonight to road test some of the material that they have been recording for release next year. The evolution of their sound since the Feminine Elbows EP is clearly audible. The main focus of the tunes are the lyrical and chord progressions rather than revolving around a particular riff or beat, and the jammed outros tell of hours in the practice room together. They finish the set with ‘Plain Clothes Sharks’, leaving our ears ringing and the anticipation builds for Screaming Giants.

An atmospheric tape intro and another wall of smoke announces the headliners. They open with ‘Throb’, a song so prototypically stoner that it could be a cover of Queens Of The Stone Age. It’s the perfect introduction for the band. After ‘Shotgun Sexy’, Dave switches his Gretsch for a black Telecaster. It’s the first time I’ve seen a guitar tech in Fibbers. Things really have changed. And it’s well that she is there as Ryan has broken a string during the song and has to call for her aid. With Dave’s spare guitar called into action, the band give the Scissor Sisters’ ‘Laura’ the stoner treatment. It works surprisingly well.

The music has a horror theme and the four band members are dressed all in black; like a groovy Misfits. ‘Deep In The Woods’ is slow and moody. Jazzer ornaments the doomy riffs and ambient guitars with howls and mournful screams. After the initial technical difficulties, Screaming Giants really gather momentum. A new song, provisionally titled the new one is a doomy rocker lead in by Dave’s searing riff and driven like the devil by drummer Liam. They continue with the second song on Found Footage, ‘Burning Black’. It starts with a simple descending riff and flips over into a Soundgarden tune.

The rifftastic ‘Nightmare’ sounds even better live with a riff from Bob Rock-era Metallica and a chorus straight from Josh Homme. A Stooges cover makes way for the haunting chain gang harmonies of ‘No More’. “That last song is called No More” retorts Jazzer when the crowd chant for one more tune. I love a band that eschews encores. With Screaming Giant’s Misfits of doom, Slouch’s Kyuss meets Weezer and Nervvs’ Iain MacKaye-isms, it seems there is life in the old dog of Dublin rock still.