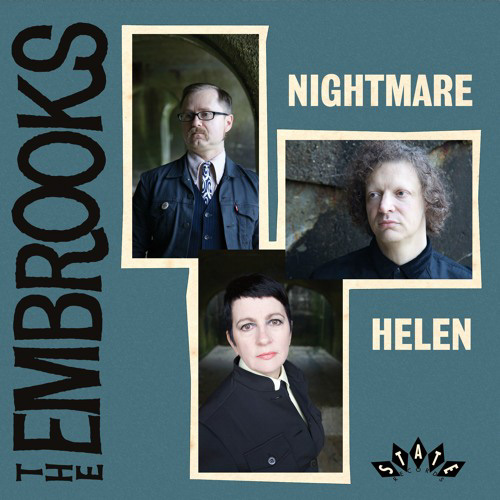 This is the first release from The Embrooks in quite a while, around 10 years give or take; and although (to the more discerning ear, perhaps) their sound has changed somewhat over the years, it’s not like they are straying into territory unknown. Of course, if you are already familiar with The Embrooks, then you won’t be disappointed, I can assure you of that.

‘Nightmare’ immediately conjures up full-on mid ‘60s, gutsy, sweaty, aggressive, guitar shredding, crimplene wearing, Mod power pop a la Small Faces (vocalist Alessandro even sounds a wee bit Marriott-esque at times), The Who, The Action etc. The quality of the recording, song-writing and sound is certainly on a par with their contemporaries. Bands such as The Galileo 7 (of which bassist Mole is also member), the many incarnations of Graham Day, and The Thanes. All pay great attention to that era, to the nth degree and then some. The standard is high, and I'm sure that for those not aware, this could have been pulled from an English Freakbeat compilation.

‘Helen’, again, is all of the above, with added pop, fuzz, psych and more 'du-du-du-do-do-do's' than you can shake a maraca at. This could only have been written by enthusiasts who eat, sleep and breathe the ‘60s sound. I for one LOVE it. It gets better with every play, and both sides of this single are equally as good as each other. It's proper wig-out freakbeat for lovers of ‘60s garage and beat, and I’m sure they’ll be winning over some new fans to boot. But beware kids; it’ll blow your mind.

This single is available now from State Records and amazon.