Nostalgia is a funny thing. Remembering the previous 9 years of Latitude, it is easy to bundle all of the significant events in the festival’s history and imagine one super-festival. Arcade Fire, Nick Cave & The Bad Seeds, Kraftwerk, British Sea Power, Hot Chip, Franz Ferdinand, Belle & Sebastian, Bon Iver, Metronomy, Bloc Party and Foals are just some of those who have graced Latitude’s stages over the years and likely figure heavily in the Latitude loyalists’ imagination of the festival. Festival organisers no doubt felt the pressure to live up to these expectations when creating Latitude 2015: The 10th Birthday. After all, what better way to celebrate than by pulling out all the stops?

However, as many festivalgoers had anticipated on the Thursday night before the festival fully got under-way, it is not immediately clear what was so special about this year’s line-up. Alt-J headlined the Friday night, delivering more-or-less what was expected of a band whose popularity had somewhat faded since their 2012 Mercury prize. Similarly, Noel Gallagher’s High Flying Birds served the purpose of closing-night headliner, drawing in born-again Oasians and finishing the festival well with “Don’t Look Back In Anger”.

Portishead and the Manic Street Preachers proved the best of the higher-billed acts. The former rarely come out of their lair to play, their three albums over twenty-four years underlining their selective disposition. Backed by large imposing images of David Cameron with light rays coming out of his eyes, the (almost) Bristolians delivered every one of their hits with perfection, finishing off with a surprise duet with Thom Yorke. The Manics similarly brought previous form with them, offering a light-hearted and fun moment in the festival on the Sunday evening. For those still in doubt about the billed line-up, the surprise return of Ed Sheeran, Snow Patrol and Thom Yorke in secret gigs should have provided some relief. 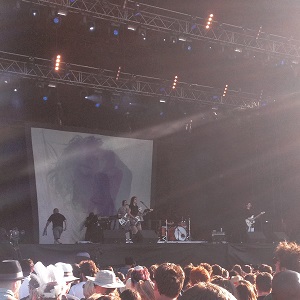 Latitude, of course, has always sought to avoid putting its festivalgoers through the ‘stressful’ experience of plotting a course through an epic bill of headliners. More emphasis is placed on allowing those attending the time and space to discover things for themselves – a first world problem resolved if ever there was one. Perhaps the 10th Birthday took this too far at times; it is hard to remember a Latitude in which the afternoons felt quite so lightweight in terms of acts without much ‘oomph’. The upside of this, in line with the Latitude ethos, was that several smaller, newer acts were given an opportunity to thrive. Songhoy Blues, Leon Bridges and Young Fathers all kicked life back into festival’s daytime billing, drawing large crowds of fans gained largely over the last few months. Warpaint, playing on the Sunday afternoon, delivered a fantastic and tight set with their usual subtlety and light-hearted spirit. The technical talent of these newer artists clearly meant more to the crowd than the length of their discographies – though it was obvious from the energetic performance of King Gizzard & The Lizard Wizard how they have managed to pump out six albums in five years. Equally, acts that may not have been considered ‘headliners’ to the crowds that turned out to see Kraftwerk in 2013, evidently meant as much to the increasing amounts of under-20s populating the festival, who turned out in droves to catch the tented parties hosted by Django Django and SBTRKT.

Elsewhere, Stuart Bowden’s dreamlike one hour operetta ‘Before Us’ did for live comedy what Dan Deacon does for live music, and would have perhaps been the comedy performance of the festival, had it not have been for The Boomtown Rats equally surreal and unhinged performance.

While Latitude 2015: The 10th Birthday was not a celebration studded with the biggest names in the festival’s history, who says it needed to be? Latitude has always used big names sparingly; a hook to get festivalgoers into an environment in which they can discover other, new things. If the lures have changed over time, the ethos has remained the same. Latitude 2015 never seemed a ‘go out with a bang’ farewell, rather another instalment of a festival determined to stay.