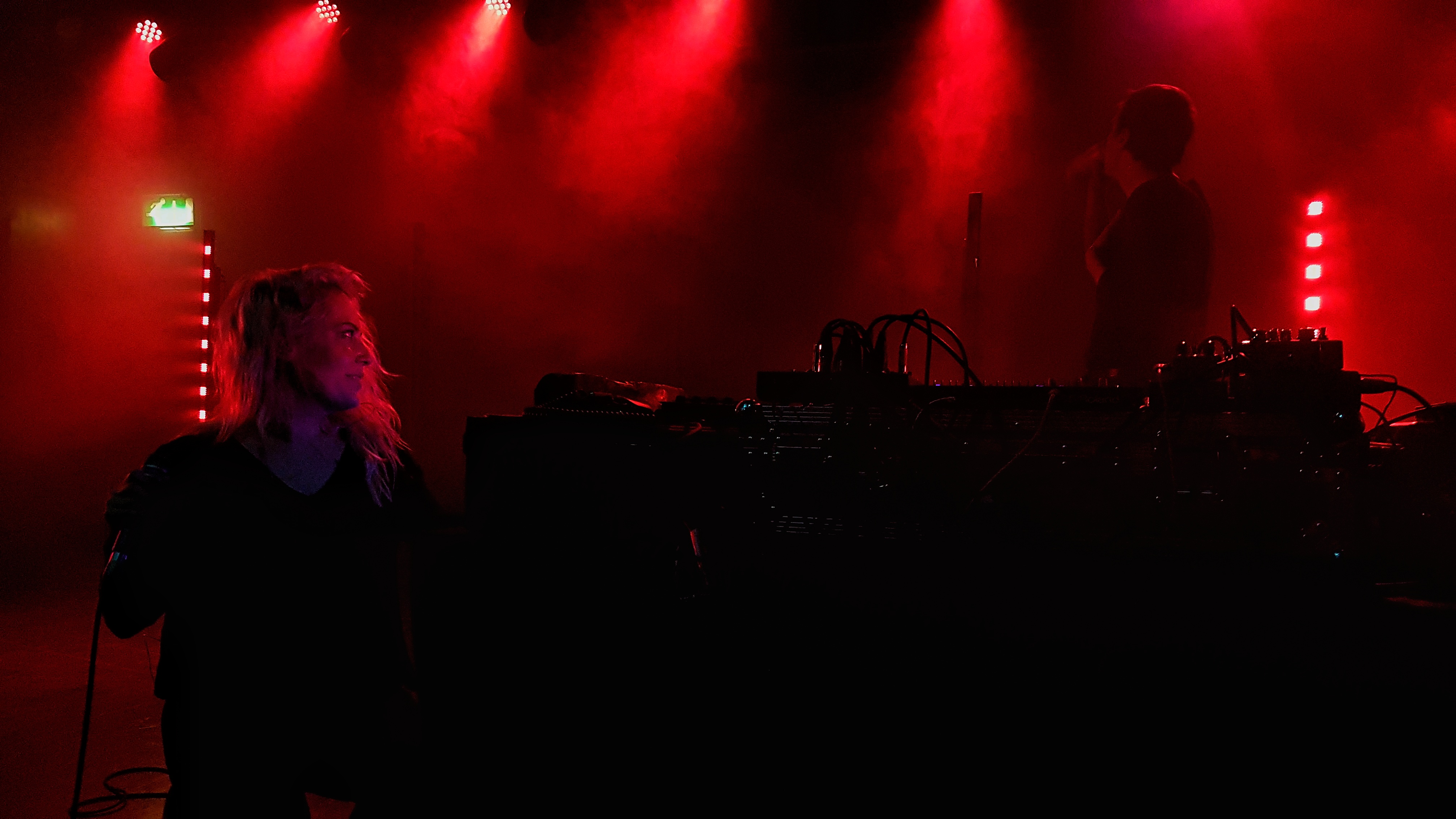 I'm at the Shacklewell Arms checking out a band, Human Pet (@humanpetband), when I run into Connor (Guitarist for The Cosmics), his partner Marta and shortly there after Double D Double J (Jessica Jefferies who shamelessly sports a Canadian Tuxedo whenever she hops on Apollo). We're chatting between sets and enjoying a constitutional or 2;  Connor is thankfully going on about guitars and Ty Segall at length which frees me up for a change from always talking over everyone when over his shoulder I notice a poster listing upcoming gigs BOY HARSHER in particular sticks out to me. 'Wow, I've got to see them' I think out-loud. I ask Double J if she knew of Boy Harsher or had she heard any of their tunes before. FYI we're at my flat and she's sitting across from me right now but I can't remember how she responded to my question that night. 'Do you remember what you said?' She cups her face with her hands, makes a very audible exhale, 'Mmmmmmmmm I caunt remember'. She's also just complimented my fake British Accent as I re-read the sentence over to her mockingly. I go home that night determined to review the gig and a few e-mails later between myself and the team over at Stereo Sanctity PR (@Ssanctity) and I'm on the list plus+1. Double J laughs about the list +1, 'that didn't get us on the list', more to come on that later.

It's Tuesday evening now and as the Scala is about a 10 minute bike ride from my place that's how I imagine I'll get there. Lo-and-behold however I've come into work and discovered Double J has been replaced by a pirate, or a reasonable facsimile there of. She's hurt her leg climbing and is hobbling around like Tiny Tim on crutches. 'I wasn't on crutches' she strongly clarifies with a lofty tone from my couch, ever hear of a metaphor or creative liberties before J? 'No'. I'm outside the building we both work at in central london chilling on Apollo who's volunteered to give both of us a ride to the gig. From the shadows emerges this duplicitous figure descending upon me with a hobble. I'm about to say I don't have any change when I realize it's my newly disabled pal. She hops on Apollo and with a 'weeeee' off we zoom between the traffic towards the gig.

Outside the Scala, we've dumped Apollo under a street light and attempted to join the queue. To be clear the 'queue' is 5-6 die-hard fans 'yeah' J confirms. There are barriers leading to the door. It's about 7, doors open 7:30, and a security guard comes out and very firmly asks, 'everyone to back up. I'm going to have to agree with J on this one, it was fucking weird dude, I mean I've never stood facing forward while walking backwards the wrong way to the entrance of a venue, I guess there's always a first time for everything. Okay, let's skip ahead a bit to the part where we 'got in' and were 'on the list'.

Still not used to saying it I give my name at the ticket booth followed by 'I'm on the list'. Reading/Saying it still makes me cringe. 'Name?' I give my name, 'you're not on the list'. Surprisingly this has actually never happened to me before while reviewing gigs. He allows me to look over the lists in case he's missed my name but he hasn't. I quickly pull up the Stereo Sanctity e-mail's as proof but it means nothing to him and he's informed me he's going to get the manager. J demands to know what's going on as she sidles up next to me. The manager isn't showing up and I'm sweating bullets. I think the key-master takes pity on us and probably remembers my half-baked mug from being at The Scala pretty much every other week so as a professional courtesy from one music fan to another he just stamps us and let's us by. Shout-out to that dude and his sweet looking curly-fro-y brown locks for saving a lot of embarrassment for us and aggro. Also thanks to the Stereo Sanctity team for reaching out to Boy Harsher's tour manager to make sure we got in alright.

We're in. Through the doors we see a space in front of the stage just wide enough to fit two very small human shaped objects. You might be asking yourself, Cap, why the front? 'Cause we're short' J chimes in. Although that's technically true J, for me rule #1 is don't stand up straight if you don't have to. Folks, get your lean on, you're gunna be there a while.

Opening for Boy Harsher was one part of @MinuitMachine @Hante_ otherwise known as Hélène De Thoury. Double J tells me she liked Minuit Machine but upon pressing her for details I got, 'it was dancy, electronic and there was a lot of orange' I ask, was it a lot of orange? 'No, not just a lot of orange, she had other things going on too'. 'To tell you the truth, it was really dark, the stage was really dark, it didn't make a huge impression on me' she says. That being said while Double J here was looking up Minuit Machine's instagram profile she realized they were playing the last week of November (28th) at the Shacklewell Arms, 'I think I might go see her again'. As for me, she did make an impression on me. What is it about the French and electro? I think they've got a knack for it. Minuit Machine is a dark horse and she (they) are definitely in the running. I thought her music and set showed a lot of diversity within her genre, deep electro tunes with tightly formed beats rising and falling throughout her set. It must be especially hard being part of a duo but then doing a set on your own, if so though Hélène' showed nothing of the sort. She was up there keeping a steady rhythm both in her tunes and her dance moves, she looked and sounded great. Fatalistic sounding fun at its best folks. 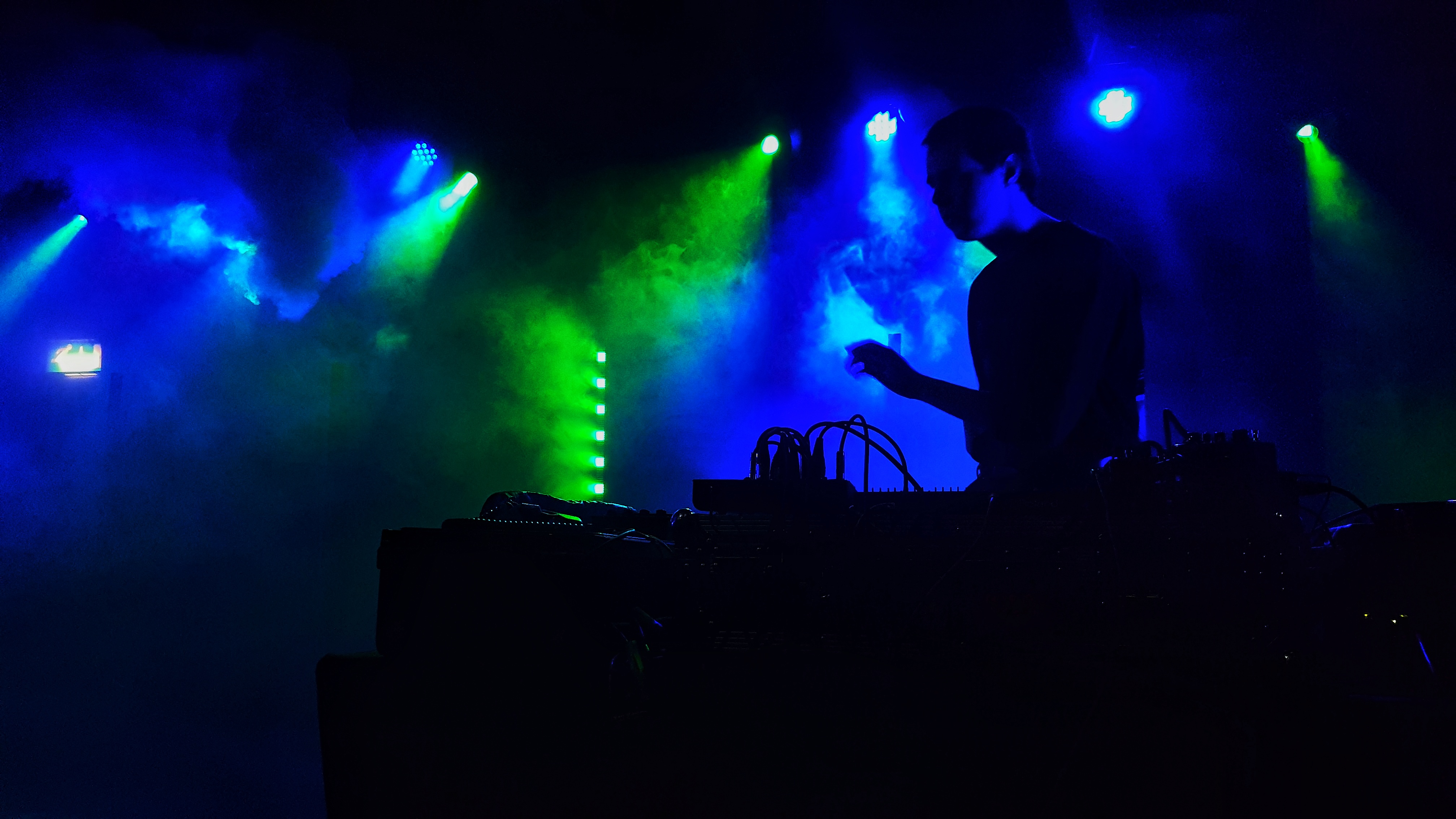 Moving along, time for our main event, the heavyweight contender, @BoyHarsher. You ever see those red flashlights soldiers had on their person in Vietnam? You know, the one's that they'd shine inside those crazy tunnels? Well Jea Mathews comes out on the darkly silhouetted stage splashing down a beam of red something like what the bad guys must see before they're melted into a jelly from Superman's Heat Vision. I'd been anticipating this performance for a real long while and I felt pretty lucky to be there, but would they disappoint? In my experience it's not so great getting your hopes up. Fear not though chums, you won't be turned into a jelly like paste on the floor or be disappointed in their performance if you're fortunate enough to catch it.

'The first thing I noticed' Double J says, 'is the music was real pumpy, it made you wanna move, like I said it's now on my cycling playlist for kicking it into overdrive when I'm running late for work'. I work across the hall from her, she's always late for work. 'I noticed that everyone in the crowd was really cool looking, all dressed in black, I don't think I saw anyone wearing anything that wasn't black. In fact, I'm pretty sure someone was wearing sunglasses too, everyone had rings on all their fingers as well. I really liked that Augustus didn't say anything the entire time and that he was so cool and composed. He just kept pumping his arm,' Jess is pumping her arm in the air right now and fyi it doesn't look anything as cool or like what Augustus did, 'he showed no emotion. I mean he was definitely having a good time and you could tell.' I'm going to have to agree with Jess, this performance did NOT let me down in any capacity, allow me to explain.

Let me start off by saying that Jay, who's got her eye-brow-arch game on lock-down son, is a little instigator isn't she? She's coaxing and teasing the rogues out of the gallery all night long. She's trying, I assume, to illicit anything from the steely chef of death cooking up some fiery and most wild beats none other than Augustus-Maximus, but to no avail he's stone cold. When that guy's behind his equipment I don't even know what to say, he's like some sort of fucking mad scientist. He's dropping catalysts in beakers, he's cranking up the flames beneath the test tubes of MADNESS. Their setup which looks quite minimal to be fair must be anything but. The spaghetti of resistors and wires that make up their equipment also make them IRRESISTIBLE. I couldn't get enough. Club kid vibes meet Gothic vampire industrial slaughterhouse with a generous helping of Depech Modey-Joy Divisiony undertones, they take you there and bring you back, whaaaaaaaaaaaat. I think I can honestly say I've never experienced sounds like these woven together. Throughout their performance they play different roles, Jay on the CB mics is easily coherent in her lyrical savvy, Augustus on the other hand comes through the speaker in this incoherent and demonic voice, it works, it works real hard. The work is a rich pastiche of all sounds '80s sampled from origins unknown yet instantly familiar. He's reminiscing my own mind back to me, wow dude. I went in thinking at best I'd hear the music I already enjoyed live and that'd be great or at worst they'd flop live like so many of my favourites have. Maybe not so many, but enough to leave a bad taste in my mouth, anyway. I came out seeing Boy Harsher in a completely different light with an infinite amount of respect for and of their process. Jay's non-lexical wisps of air into a mic that produced a sound you could never request of a sound engineer to make for you, how'd she even figure out how to do that? I'm rambling but I'm also impressed. Augustus - minimal dance moves but maximal style. 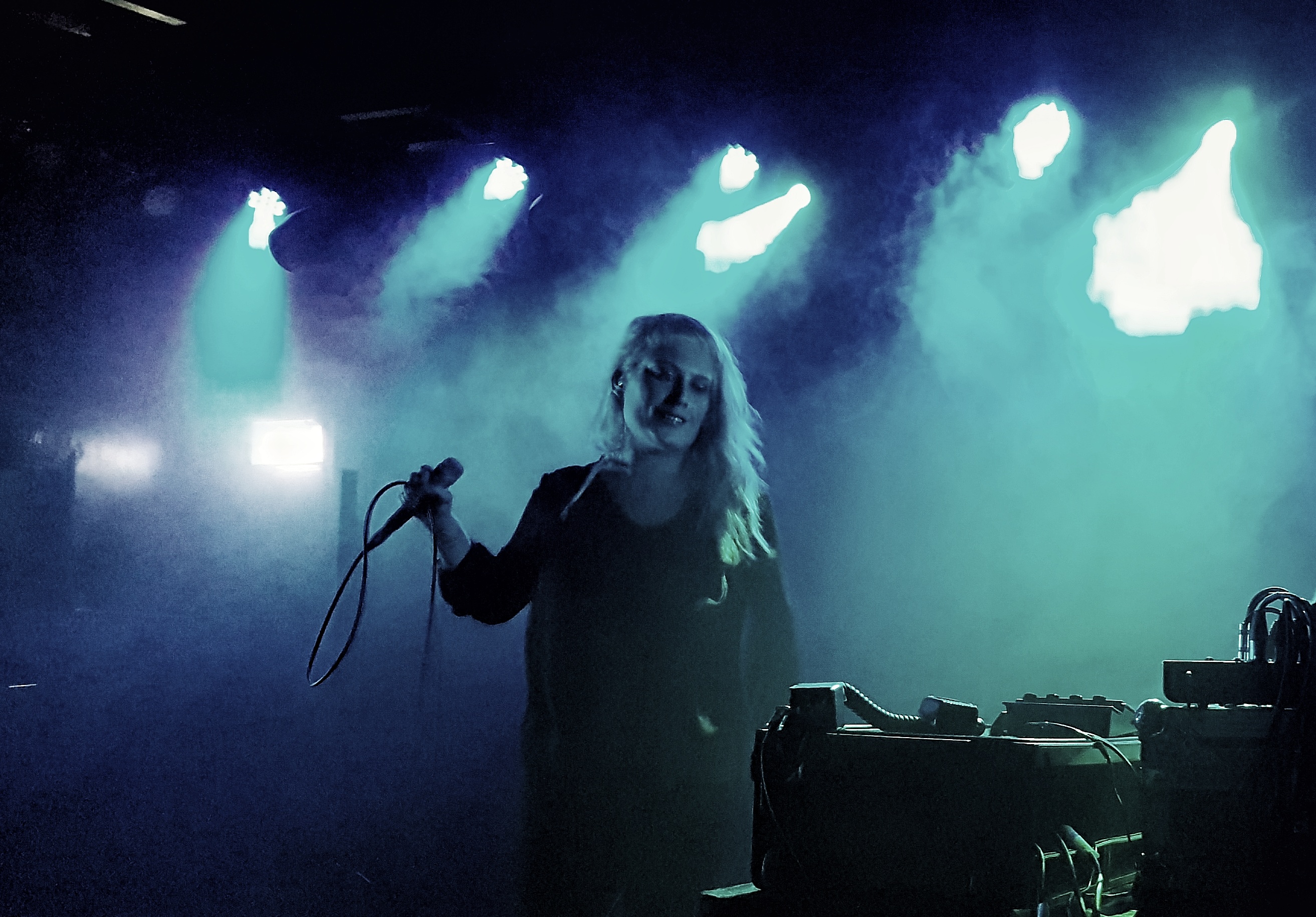 In summation. It was a helluva lot easier getting out of the Scala that night than it was getting in. On our way back from a road trip this weekend, and a long long long day, I feel like Jess and I had the Sunday night dreads with the 'oh-my-god I have to still write and submit that article by tomorrow to the editor' feeling but she said something that really stuck with me after we'd dropped off our rental. 'You know, I'm listening to Boy Harsher a lot more lately' and that folks is what you'll take away from seeing the Boy at his harshest, you'll be listening to them a lot more, a lot more likely.