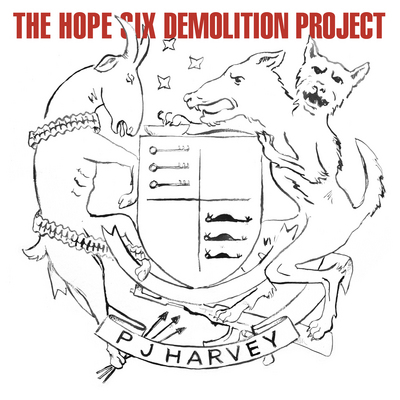 There emerges from the ninth album by PJ Harvey a breath of revolt, really discovered on the second song, the martial 'The Ministry Of Defence,' the introductory 'The Community Of Hope' sounding more like a reunion with the very big band rhythm. 'A Line In The Sand', the third title, brings to mind the  many moods of the previous efforts of the lady, the grandiose Let England Shake which earned her the Mercury Prize. But it is mainly the social content that provides the special colour to The Hope Six Demolition Project.

Inspired by Hope VI (a US project of building demolitions in criminal areas that was supposed to offer new housing but only generated social misfortune, the former tenants unable to afford to pay the new rents) the disc is the result of a trip to Washington including Polly Jean Harvey, photographer and director Seamus Murphy, and their guide, Paul Schwartzman of the Washington Post. The result is this album shaped tour of the US capital.

At first glance, one might expect a serious album and depressed accusers facing the insane policy of the city council, but that would be forgetting firstly that PJ Harvey is a musician and, secondly, that it has a lot of humor and irony. Evidenced by a title like 'Medicinals' that comes with a certain energy recalled that before the era of concrete, there was a whole plant and spiritual world around us and that this world is still there, just hidden by those who have no idea, preferring to pack medicines and other drugs to escape from reality too painful. Especially, some songs do not seem to mention the general theme of the album.

Recorded live amid an art installation in London, The Hope Six Demolition Project has once more utilised the production talents of John Parish and Flood.

Asked by the press to comment on the attacks against the council board responsible for the demolition, reconstruction new rents, members of Ward 7 Washington said they were deeply shocked, telling PJ Harvey (they did not previously know her work) of all names in hiding behind their status as civil servants. Problems were also blamed on the artist name without proposing anything to solve them. As if it was the work of musicians ...

As Neil Young in 2015 with his album The Monsanto Years, PJ Harvey seems to have reminded the world that part of the job of musicians labeled "rock" is to awaken popular consciences rightly criticizing those who do not.

The Hope Six Demolition Project is available from amazon & iTunes.

More in this category: « Lera Lynn - Resistor The Last Shadow Puppets - Everything You've Come To Expect »
Login to post comments
back to top