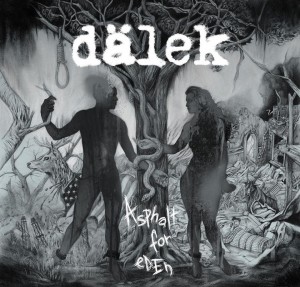 Dalek released five albums between 1998 and 2011 carving out a niche for themselves in hip hop and crossing over to a rock audience with their broad palette of samples and sophisticated lyricism. These guys aren't writing songs about hot tubs full of champagne and mountains of cash. The New Jersey trio deal in reflective, relatable prose, filled with anger and frustration, about everyday injustices, over samples of claustrophobic intensity. Reformed with new members DJ Rek and Mike Manteca joining original member, MC Dalek, they have returned with their new album Asphalt For Eden.

Dalek have a unique sound. The MCs combine their forces over a musical backdrop of understated low tempo jazzy beats and diverse noisy samples. They are lauded as avant garde, experimental, a one of a kind musical synergy blending noise and rap. But is it entertaining?

Asphalt For Eden is a slow burn, revealing more with each listen, but too often it is just hard work. Any experimental outfit will achieve mixed results in how successfully each track turns out. The seven tracks here vary wildly in their outcomes. It is an uncomfortable listen, not helped by the thin, barely-there beats and some highly questionable mixing decisions. The MC's lyrics are often obscured to indecipherable levels by the noisy drones.

The end result is a kind of hip hop shoegaze. Like many shoegaze acts the lyrics are relegated to a support act for the atmospheric soundscapes. It's a combination that shouldn't work and most of the time it doesn't. When it works, as on 'Shattered', '6db' And 'Critical', Dalek are a hip hop proposition without peer. When it doesn't your finger is itching to hit the skip button.

Indecipherable, mysterious lyrics work well if you're My Bloody Valentine or Cocteau Twins but with lyrics as direct as these , it seems self-defeating. Asphalt For Eden is more miss than hit over the seven tracks here. Dalek earn an A for invention but a D for execution.

Asphalt For Eden is available from amazon & iTunes.