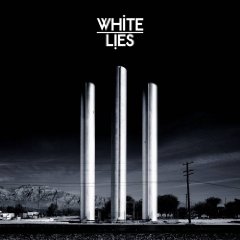 Newsflash: People Die. Thus presumably read the fax Harry McVeigh, Charles Cave and Jack Lawrence-Brown received in October 2007 prompting them to dissolve their band Fear of Flying and reform as White Lies. For that point apparently marked the rebirth of the band as a band who would write songs with a "darker sound". Oh dear.

Who knows, maybe if the famous powerhouse of morbidity Gustav "The Krusher of Kaliste" Mahler had written lyrics to his songs they would have been on the same level as "I leave my memoirs in blood on the floor of my fears with the nurse on the steps". Luckily for Mahler, we'll never know. Unluckily for White Lies, we do know - listening to the lyrics on To Lose My Life... is akin to reading a diary you wrote when you were fourteen, alternating between ridiculous exhortations of undying love for some spotty schoolmate or other and affirmations that if Mum doesn't stop going on at me to tidy my room I swear I'm gonna cut myself with a razor until I die or whatever and NO-ONE WILL MISS ME.

White Lies have been compared to just about everyone in the "vaguely dark sounding post-punkish music" category, especially Editors, Joy Division and Interpol. Harry McVeigh's voice is definitely Editors-esque, but they lack the (very slight) sonic variety found on 2005's The Back Room. As for the Interpol comparisons, I really hear nothing in common between them - Interpol experimented with time-signature clashes and (on the first two albums at least) have a rhythm section that is so innovative you don't even notice they're playing with standard song structures like monkeys taking bananas from a tree, disappearing for an hour and coming back with a bowl of banana-flavoured ice cream. With chocolate chunks.

As for Joy Division, I long for the day when a band can play guitar music in a minor key without being compared to Ian Curtis et al. Sure, the drumming is metronomic and, if the album didn't sound like it had been produced by a child who had just drunk his own weight in orangeade, might sound quite cool and Stephen Morris-like. Oh, and there's some similar synth sounds every so often, but, and I apologise for quoting so much, Ian Curtis wrote lyrics like:

"We knocked on the doors of Hell's darker chamber, Pushed to the limit, we dragged ourselves in, Watched from the wings as the scenes were replaying, We saw ourselves now as we never had seen."

White Lies - it's your turn to respond:

"I saw a friend that I once knew at a funeral,
He took the time out to be seen.
His eyes kept glancing to the hour hand on the gold watch,
That he'd been given by a magazine."

You see? White Lies are hurt by having more lofty comparisons made about them by hyperbolic publicists and lazy music journalists than silicon bags in an issue of Nuts. They are a perfectly serviceable "hear them on the radio once or twice and quite enjoy them" band. Hell, if you don't listen to the 'angsty teen writing on his Converse'-esque lyrics of current single 'To Lose My Life' you could dance to it. In a club!

I don't know White Lies, so I don't know if they're aiming to be the next Joy Divsion. If they are, though, they should give it up and aim for something much more achievable, yet much more profitable - filling the big Killers-shaped hole recently vacated by the Killers to write Songs That Mean Somethingâ„¢ (badly). In truth, To Lose My Life... is a bit of a stinker. Actually, scratch that, To Lose My Life... is woeful, but there is something in there that assures me that if they drop the pathetic lyrics about death and get decent producers who could bring something a bit interesting to them whilst maintaining a top 40 sound (are Erol Alkan or Bernard Butler free?), they could make the next Hot Fuss. Which we could enjoy for a few months before getting horribly sick of. Ta-dah! That's life, I guess.
Rate this item
(0 votes)
Tweet