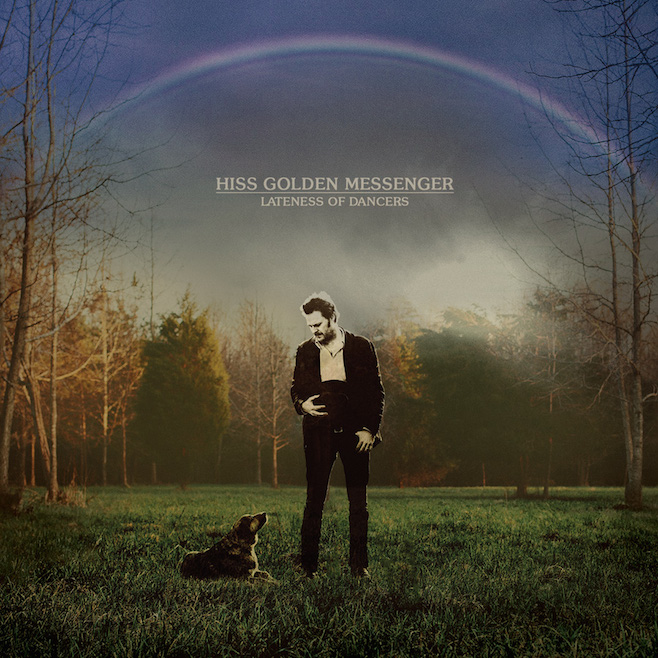 When an artist whose music you truly admire puts out a new release it can prompt a range of emotions. Perhaps feelings of relief that your support of their music and the investment you have made in it continue to be worthwhile. Or maybe sneaking disappointment that it doesn’t quite live up to the standard that got you hooked in the first place, but hey you’ll continue to buy their music because that’s what fans do. Or that it must be a grower if your initial reaction is lukewarm.  It might also beg a different question. That is, who is best placed to review a record? Is it someone with fresh ears and no baggage, or someone who has spent time with the music and its context? Certainly being clear about your standpoint as a reviewer seems a good place to start. Having put out some exceptional records over the last five years, Hiss Golden Messenger releases tend to hold great import for those who cross paths with them, and we’re no exception. For us, this one of those bands that means a great deal.

HGM grew out of the demise of San Francisco-based The Court & Spark, who were usually filed under alt-country. They had critical success but less so commercially and ended in 2007. Since which time core members M C Taylor and Scott Hirsch have continued to make music as Hiss Golden Messenger. Broadly, the songs are written by Taylor, with Hirsch adding bass as well as recording and engineering the records.

The music business being what it is, by the time of Hiss Golden Messenger’s second album proper, Taylor was no longer sure he even saw a future in music. The hauntingly beautiful stripped back songs that ended up as Bad Debt (2010) weren’t even intended for release at first, recorded as they were at his kitchen table while his young son slept. They were born instead from someone asking questions of himself and the world around him. At the time it was a world in disarray as the financial crisis took hold, raising with it moral questions about the state of humanity and, as he became a father for the first time, leaving him wondering what kind of world he was bringing a child into. As Taylor has noted in interviews, these were questions that did not necessarily have easy answers but have informed much of their subsequent output. The highly-praised follow-ups, Poor Moon (2011) and Haw (2013), both featured reworkings of a number of songs from Bad Debt in a full-band context.

Taylor has been critical of The Court & Spark’s output for being too beholden to what they thought would do well. It is clear that he now writes songs that are not aimed at pleasing others but that confront the subjects and questions that matter to him. And of course the beauty of doing that is you stand a good chance of mattering to other people too. The press release for their latest album, Lateness of Dancers, gets it right when it says Taylor “has been writing some of the most highly regarded folk-rock/Americana music of the last decade, all the while remaining firmly planted outside the confines of the most recent folk-pop revival.” In short, he is not following any trend.

So, how does the latest album from someone whose previous work we have held dear stand up? Notwithstanding the intimacy of Bad Debt, sonically Lateness of Dancers feels incredibly immediate. Taylor has long talked of his admiration of albums that were recorded quickly and thus retained their sense of being played live in a room. This is no doubt aided by the fact that a number of the musicians who appear here – Brad and Phil Cook from Megafaun, Terry Lonergan and William Tyler - have now done so for a couple of albums. Beyond Taylor and Hirsh, HGM has never had a fixed line-up, although that seems to be changing slightly. They have always prized groove though, and the music on this album seems to stretch out effortlessly, to the betterment of the song, rather than the self-indulgence of the musicians. You won’t hear many solos as such. This feels as if it’s the closest they’ve got to some of their benchmark albums (things like Richard & Linda Thompson’s I Want to See the Bright Lights Tonight, or pretty much anything by The Band, but especially their first two albums). The sound is still rooted in country and folk, but often twisted to bring in disparate influences such as the backwards guitars on the title track, the muscular guitar on ‘I’m A Raven (Shake Children)’ or the warm soulful bass that runs throughout the album. In fact, Hirsch’s fine bass playing might just be the secret weapon in the HGM catalogue.

Lyrically, many of the same questions appear and remain unanswered, but there does feel as if a weight has been lifted, a greater acceptance maybe that you can combine the responsibility of parenthood with fun, and even reckless abandon (“When Saturday comes, I’m gonna lose control / I might get a little crazy” on ‘Saturday’s Song’); that even with “a couple of kids”, “happy days are still ahead” as on ‘Mahogany Dread’. But uncertainty still pervades many of the songs, ‘I’m A Raven (Shake Children)’ admits that “Maybe I could see it as a peaceful world / But hey, I’m afraid”. Or the plea for a less complicated way of living, “Let us be simple / For a little while” and later, “Teacher, come teach me / About another way to be happy” on the soul-inflected ‘Southern Grammar’, complete with stunning backing singing, which throughout feels more purposeful and inventive than before (principally provided by Alexandra Sauser-Monnig of Mountain Man).

Taylor has spoken of his need to write songs that he can feel confident in playing night after night to crowds of people he doesn’t know. That confidence extends to opening the album with a reworking of an old The Court & Spark song, ‘Lucia’. Noticeably slower than the original, it exudes confidence in its vocal delivery and the time it takes. HGM also has a knack for slow-burn songs (see excellent standalone single earlier this year, ‘Brother, Do You Know the Road?’) and ‘Lateness of Dancers’ is a beautiful example that might just be the centrepiece of the album. It is a song that demonstrates the power of restraint, essentially an acoustic guitar track with the other instruments (piano, banjo, guitar) pushing at the door but never breaking through. Musically it echoes the lyrics that sum up the conflicts that are the cornerstone of Taylor’s writing and that inflict us all, swinging from confidence (“Yes, I’m learning now” and “It’s easy now”) to “Like a beggar I went roving / With no clear sense of direction”.

Anyone with children will know the self-doubting sentiment of ‘Chapter and Verse’ when he sings, “I’ve lived through times / And almost wasn’t good enough”, if indeed he is talking about parenthood. Aptly, Lateness of Dancers ends with another Bad Debt cut, ‘Drum’, with the uplifting refrain, “Take the good news / And carry it away”, beautifully brought to life with the addition of an old-time fiddle part.

Yes, we loved their earlier albums, and yes, we may be partial, but damn, this is another very, very fine record. This feels like a grown-up album for people trying to balance their own sense of self with the responsibilities of adulthood, be that raising children, making a living, or just how we live together. It does so eloquently, with passion and with confidence.

More in this category: « Dry the River - Alarms in the Heart Interpol - El Pintor »
Login to post comments
back to top