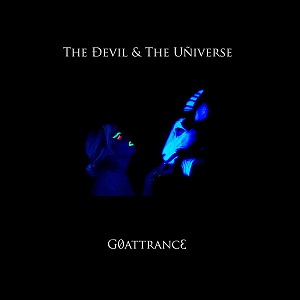 Welcome to HeartSongs, our regularly scheduled (probably) look at songs and the people who write them. We spoke to Ashley from Austrian folk horror ritualists, The Devil And The Universe, about their new video for ‘The Church Of The Goat’.

“From very early on it was clear to me that this track could become something else. Something that could combine everything this project is about in one song. Also, something that could get us two steps further if we are lucky. So I couldn’t think of a better title. It’s the gospel according To The Devil & The Universe. “Open up your prayerbook and please be seated, your savior is near!”

It’s a love song to ourselves. This project was always designed to be more than just another band doing some weird music. There is more than meets the eye, or is there? Or is it all a bad joke told in a convincing way? There are certainly laughs though. I can give you that. TDATU became this sort of living organism which is playing with us, or do we play with it? I haven’t figured that out myself yet.

At first, I just had the opening four minutes of the song (the long version) and then it dawned on me, I could go from there and make it a 10min rollercoaster ride and put everything in and make it really, really grand. It became bigger and bigger. I spent several nights getting the balance right. Also, my new fascination with classical music went straight into that track. Especially my love for Gustav Mahler. Of course, the song isn’t as grand as that stuff, it’s not even close, it’s just my interpretation of it and the Spirit of Mahler is definitely inside that tune so to speak. He would properly disagree wholeheartedly though if we could ask him. However, for me it is very clear where the inspiration came from. The new ‘Radio Mix’ is a different beast though and straighter to the point. It’s more pleasing for the dancefloor I guess.

After I spent weeks working on that one I realized something was still missing. I wanted to have some sort of vocal track and searched the internet for samples and stuff but wasn’t pleased with anything. And then it came to my mind a good friend of mine, Christina Lessiak, might be able to provide the kind of vocal I had in mind. Just two days later I had her recording and it was exactly what I was searching for, just perfect. Some twitching here and there and the beast was ready to be unleashed.

Edie Calie and I did the concept for the video (like we did with all other videos before), however, this time we didn’t want to tell a story. From the get-go we knew this should be more like the back projections we use during live shows. Someone mentioned UV-light make up and off we went. It’s filmed at home in the bedroom. No need for a big studio or location this time. Luckily Christina, the singer, did a fantastic performance. We included the goat here and there for good measure, Edie did some fantastic editing, and it was finished. We always work very intuitive though, create on the go, on the spot with the things we have. Very much like with the music itself actually.”

Check out the Goattrance EP here