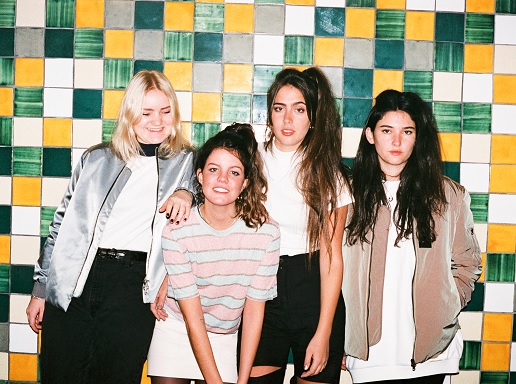 Absolutely wild and insanely fun is the short review of Hinds' most recent show in Glasgow.

Reportedly their fourth in the city, clearly the Glaswegian crowds know by this point what the Madrid-based quartet are all about as the energy escalates to a euphoric climax from the beginning to messy end. I've somehow missed the previous three visits, which feels more like a sin than ever in tonight's religious venue, but I've finally received a refreshing taste of what I missing.

After some technical issues earlier on, their perpetual carefree attitude and infectious stage banter propels Hinds through their set with complete ease. Whilst the crowd is packed out and evidently eager to party, it isn't until the ferocious one-two of 'Easy' and 'Bamboo' later in the set that things really erupt, which the dancing and jostling breaking out in force.

Standing off to the side, it's a genuine pleasure to watch the band rock out with smiles on their faces as the crowd reflect their positivity. Following one of those predictable encores (yawn), the band finish things of in raucous style as the last song needs to be restarted after being halted to disperse a stage invasion.
Carlotta Cosials returns the favour by playing out the rest of the song on top of the crowd, bringing the night to a sweaty and jubilant end.

After missing Hinds various times, and painfully opting not to see them whilst in Barcelona, the quartet have injected a hearty dose of fun and sun into the Glaswegian winter, and put some fire in the heart of a very appreciative crowd.