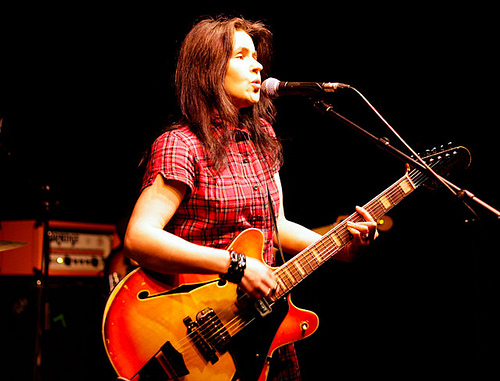 A first live offering of Emma Pollock’s well-received, new album In Search Of Harperfield is not something to miss. The personal nature of the album material which deals with the loss of her mother and her father’s illness seems to make for an intimate gig with Pollock chatting away as she tunes her guitar before beginning and between songs.

It’s not surprising then that the first song is ‘Cannot Keep A Secret’. The four-piece set up on stage handle this eerie opening with an echoing piano to back Pollock’s occasionally whispered but always clear vocals. Now, they turn upbeat with a mix of songs from the new album and her previous one, The Law Of Large Numbers. One of the strengths of In Search Of Harperfield is the story it tells and the emotional atmosphere that it builds. This not entirely lost in this performance as the audience listens intently giving generous and almost theatrical applause at the end of each song. The choices of old and new songs intend to maintain that feeling with ‘Confessions’ followed by, in her own words, ‘a trip down the rabbit hole’ in ‘Alabaster’.

The show is not uniformly successful. Using a sole guitar accompaniment rather than the strings of the album works well in the loudly requested encore of ‘Dark Skies’ but does not quite come off in ‘Intermission’. The most obviously pop track, ‘Parks And Recreation’ gets a lively outing but there is little effort to try to show that there are two voices (the bully and the victim) in the song. The unfortunate absence of guitarist of R M Hubbert due to illness means there is a bit of live ‘band consultation’ about a change to the set list. However, there is so much good material on show and Pollock has such an easy, friendly stage presence that this can be easily forgiven.

The gig shows off Emma Pollock’s vocal and song-writing talents and as the early wrinkles are sorted out, the tour will no doubt delight audiences.