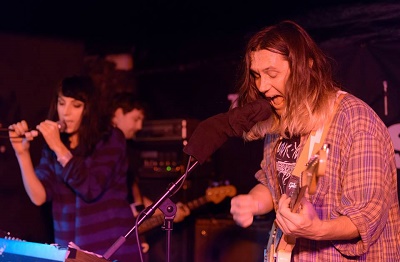 With an abundance of festivals all over the UK, to add another to an already overflowing array may seem daft to many. To Middlesbrough promoters The Kids are Solid Gold and Pay For The Piano, however, it seemed like a great idea and from that idea Twisterella was born.

The festival is spread across five venues just off Middlesbrough Town Centre, and boasts a line-up of over 40 up and coming local, national and international bands. We arrive early in the afternoon heading straight to Teeside University Union, to catch the awesome Fatherson, their brand of Scottish indie rock audible even from the street.

Entering the venue, we’re hit by a wall of sound and settle in for a particularly rocky set, it's no wonder why Fatherson are on the up. Unfortunately their set is over all too soon for our liking, though we’re certain that this isn’t the last time we’ll catch these guys.

We swiftly move on and with so many bands to see we head to one of our favourite Middlesbrough venues, Westgarth Social Club. We’re just in time for Spaniards IEPI, from the outset these guys are here to blow away the early afternoon cobwebs. A total out and out aural assault, delivered with visceral power and guile.

When we thought our ears could not take anymore, the utterly phenomenal That Fucking Tank replaces IEPI. Hardly a new band unlike many of those on today’s line-up, Tank are here to show their prowess. Their instrumental rock is unrivalled and they prove themselves as true behemoths. As usual, we’re completely blown away, by their set.

Today is seemingly growing from strength to strength, and as Night Flowers take to the stage everyone seems to be getting in the swing of things. Hailing from Humberside, their set is something of a move away from the previous rock behemoths. A much poppier affair, but an accomplished set from a band that are on the up, lead singer Hetty charms us as she dances away and serenades the amassing crowds at Westgarth.

We make our way over to TS One, to see a north east representative in the form of The Lake Poets play a rare solo set. The venue is packed to the rafters with standing room between the tables only as Martin takes to the stage, his sweet voice coupled with his particularly dark lyrics he has the crowd locked in from the first note. His mesmerising delivery and his awesome talent cements his place as one of the best north east artists around right now.

Unfortunately though our time with The Lake Poets is cut short as this packed line-up forces our hand, making our way back to The Westgarth to see one of our favourite bands, Menace Beach. Arriving as they take to the stage, their set proves to be one of their best and one of the most random of the day. Before they’ve even begun Ryan Needham has covered his mic with his sock.

Their passionate indie rock sounds as fierce as ever today, with tracks like ‘Drop Outs’, ‘Tennis Court’ and ‘Fortune Teller’ all sounding on top form. Every time we think we’ve seen something great today another band trounces their efforts and for us Menace Beach are top of the pile today. We’re left overly excited about their debut long player which is coming early 2015. 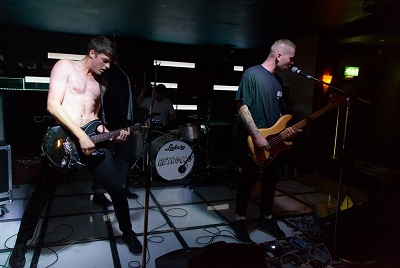 We take a short breather before making our way to The Keys for the first time, entering the venue we’re really unsure of what to expect. All we can see is dancing lights and a hefty crowd of people milling round, though it’s not long before Bad Breeding are let out of their cages. These guys come out of the traps already fired up, with an aural assault that is unrivalled by any other band on this bill.

As their lead singer throws himself around the stage and then into the crowd, the band remains unbelievably tight. It’s a performance of epic proportions and we’re just blown away by the atmosphere and the excitement that builds as the set reaches its crescendo. As the band literally stand on each other. there’s a truly triumphant intensity to the end of this short but incredible set.

We leave The Keys sweaty and overwhelmed as we fall back in to TS One to catch the start of the acoustic stage headliner the ever-brilliant Sweet Baboo, who has long been a favourite of ours. Tonight is no different and he takes to the stage to rapturous applause; a rare solo appearance completely stripped back his songs to their barest, but we unfortunately have to leave , once again showing the strength of this line-up.

We head along to The Westgarth again, just in time for the up and coming Happyness, with a ton of radio play and support tours under their belt, we’re excited to see them again, the only problem is this excitement is very short lived. Last time we saw these guys they supported Speedy Ortiz and we thought their banter was nerves and perhaps slightly misplaced. It turns out that’s really not the case; they’re just rather rude, patronising and far from happy.

Their attitude severely detracted from their mediocre music. We get the fact your from that big city down south, no need to force it down the people of Middlesbrough’s throats. They just come across so obtuse and obnoxious, it leaves us feeling slightly annoyed that we’d left Sweet Baboo to see this shambolic waste of time.

We head off early and head to The Keys as the awesome Brontide take to the stage. These three unassuming guys unleashing their intense brand of post rock, drawing us in. There’s a wall of noise as we occupy the front of the stage, eyes wide staring in awe at the sheer amount of noise that these three guys create. By the time the band are done with us, we’ve forgotten about everything that had previously happened, as we float down the street back to The Westgarth to finish our evening.

We catch the well-tipped Longfellow, a band we’ve never heard at all but they’re accomplished set of indie rock has a very polished sound, though is pleasant enough. They hold the crowd well and whilst it’s not setting our world alight, we’re almost positive that these guys will be huge before long. Just like the next and final band to take to the stage at The Westgarth.

Prides have played the closing ceremony of the Commonwealth Games and they’re certainly one of the most fancied acts on today’s bill. Despite the time creeping on and an impending long journey home, we stick around for this Glaswegian trio. These guys have honed their sound that is made quite clear the only problem is there’s very little deviation away from it.

Fortunately it’s a pleasant sound though, and the band are set to be huge. With excellent reason too, in a few months we shall look back on this, as it’ll be one of those we were there moments. Their set is accomplished and sounds as huge as their ambition; tracks like the new single ‘I Should Know You Better’ are burnt in to our minds with their exquisite hooks we find ourselves humming on the way home.

Overall though, despite one minor hiccup, we’re completely blown away by the inaugural Twisterella Festival. These guys have their pedigree as individual promoters but combined they’re unbelievable, today is a complete triumph from start to finish. Fantastic line-up and even better organisation, having been to so many inner city festivals the trek between venues is always a pain but Twisterella have this down to a tee.

We’re overwhelmed by the talent that we’ve seen today, special thanks has to go to Menace Beach and the unbelievably awesome Bad Breeding. Both bands we’re sure will be huge and for the right reasons. The long drive home seemed like nothing as we’re surviving purely on the adrenaline of the day. We simply cannot wait for Twisterella 2015.