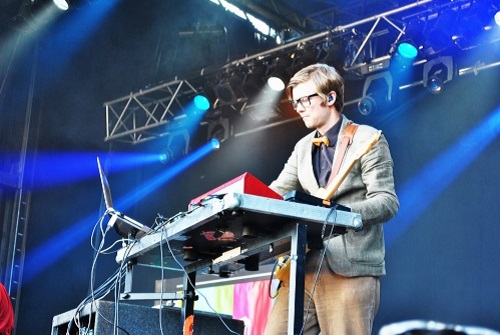 The first thing to greet us is the strange yellow thing in the sky which is now blazing down. Today’s line-up also offers us much more excitement with some wonderful acts and we aim to see as many as we can.

Up first on the main stage are Disraeli And The Small Gods a wonderful six piece hip hop band that attack with a whole host of instruments along with Bellatrix blowing us away with some amazing beatbox skills. Disraeli lays down some hard-core lyrics, which we feel could have been rewarded with a slot higher up the running order. However it’s a great warm up act and an excellent start.

We decide to avoid the parents’ pit which is hosting a live version of Dr Seuss's Cat in the Hat and plump instead for some soothing acoustic sounds on the folklore stage to catch the wonderful Frankie Furlong and Josh Mac then on to Astrid's Tea Party on the BIMM stage. These three acts go a long way to helping small festivals grow. All these acts are just starting their careers and for a new festival it’s vital that they are seen to give an opportunity to acts such as this. Moreover we the music-loving public get exposure to acts we would never have found out about. We continue to pop back and forth in-between the main stages and are lucky enough to catch the wonderful Oktoba which is a project of another Brighton-based artist Chris Athorne who we think has a wonderful future ahead of him.

After all this new music we decided we need to return to one of our highlights of other festivals. Roots Manuva are onstage and they do not disappoint. Rodney P and band pump out some classic laid back hip hop to the now much larger crowd. Obviously the hit ‘Witness’ goes down a storm along with the deep bass funk of ‘Jah Warriors’. Although a short set we were delighted to bump into him backstage and have a quick chat about his upcoming album and the importance of UK Hip Hop.

Next act on the main stage, Lucy Rose, unfortunately couldn't quite follow Roots Manuva with her acoustic sounds. She is also battling the noise made by the other stage where Fly Golden Eagle are rocking our socks off. We stay around to catch local lad Jacko Hooper who delivers an excellent set full of integrity and brings a welcome honesty to his craft which we hope will propel him to a wider audience.

With the sun still beating down and having rushed around four stages trying to cram as much in as possible we can relax safe in the hands of the wonderful Public Service Broadcasting. With a beer in hand and a wonderful crowd they take the stage. This is the highlight of the whole weekend for us. They have a wonderful mixture of unique archive sounds which are a roaring success. Their interaction with the crowd via their vocal loops and humour made us chuckle as we danced. The environment seemed to match their sound perfectly. The introduction of an added dancing dad horn section was an enormous success. For their smash hit ‘Gagarin’ they even added a dancing cosmonaut. What more can a band do we asked ourselves.

We leave the main stage and mutter that with two main acts to still to come we wondered if PSB should not have swapped slots with the closing act Jose Gonzalez.

With our feet now well and truly worn out we rather shamefully plump ourselves done on the grass, grab an overpriced burrito and settle down to await the Motown legends Martha Reeves And The Vandellas. For a woman in her 70s it is quite amazing the energy and power that she can produce on stage. She knocks out hit after hit and it felt a real privilege to see a true legend perform. We basically danced our weary butts off assuming this was the last chance for a boogie.

We are comforted to know we were correct in our assumptions. We still have time to pop in to see the amazing chilled sounds of Luke Sital-Singh. This singer songwriter has a very bright future and already has attracted many plaudits. His vulnerable voice and intense lyrics bring a calming effect to the end of the festival. The final act Jose Gonzalez continues this chilled calm effect. However we question whether a festival should end so calmly and so relaxed.  Jose is a wonderful attraction and as we sit on a now rather chilly evening we are treated to a relaxing soothing set. In between shivering and the gnashing of teeth we reflect on all the acts we have seen and conclude that it’s been a roaring success. There are a few things that need improving but we are confident that Together The People 16 will be an even bigger and better event.

There are lots more photos to be found via this link.