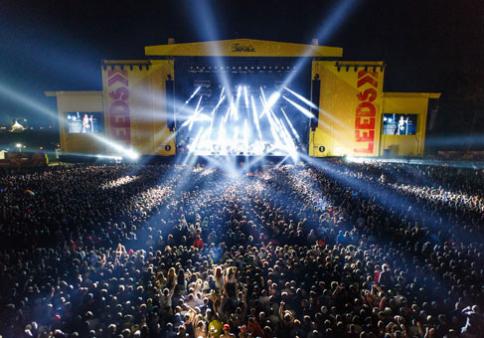 Despite getting little sleep thanks to the very public break-up that happened in the tent behind ours on Saturday night, Sunday morning arrives with the campsite in good spirits and the weather continuing its rare good form, as rumours begin to circulate about a ‘secret’ set over on the Festival Republic Stage from London’s Wolf Alice.

Much like QOTSA’s not-so-secret set two days prior, anyone with battery and the festival app would have found out about it a couple of hours before stage time, but even still, as midday rolls around and the four piece appear on stage the tent is less busy than expected. That said, as they launch open with their most recent single ‘Don’t Delete The Kisses’, you’d be forgiven for thinking you were watching a headline act, given the modest crowd’s huge reaction.

With a setlist comprised of nothing but singles, every track aired evokes a similar reaction to the first. And when the band finally finish with a rousing rendition of ‘Giant Peach’, the crowd loses it. Having already made their stake on headline glory in 2015 with a blistering performance on the NME stage, you can guarantee that following this morning’s set, they’re well on their way to the realms of indie royalty.

At a somewhat more emo end of the spectrum, Moose Blood’s over on the Main Stage were a perfectly inoffensive way to ease any lingering hangovers. And while the older members of the crowd offer little more than ambivalence towards the Canterbury four-piece, the fans at the front hang on to front-man Eddy Brewerton’s every word.

Flipping that scene on its head, it’s little more than three hours later, and the older crowd, all too aware of the post-hardcore royalty that stand on stage before them, are hanging on to every crunch and scream of At The Drive-In, while those younger members of the audience look on bemused, or opt to head elsewhere.

It’s something that continues for nu-metallers Korn, whose set, though plagued by a thunderous low-end that drowns everything out. That said, the band slam through  an impressive fifteen song set, airing classics such as ‘Falling Away From You and ‘Blind’ while ‘Freak on Leash’ signals numerous circle pits and ends their set on a high.

It’s a direct contrast to the sun-kissed indie-pop of Macclesfield’s Cassia, who draw a modest but devoted crowd over on the BBC introducing Stage just before hand. Having just released their latest single ‘Sink’ the trio are riding an impressive wave at present, and while their tireless work ethic must be taking its toll by now, they show no signs of fatigue as they liberally scatter their set with fan favourites such as ‘Moana’, ‘Paradise Beach’ and the massive ‘100 Times Over’. With a set that feels short but sweet, you can expect to see them rise through the R&L ranks over the next couple of years.

With the sun now set for the final time on this year’s festival, and the anarchic and somewhat over the top bass of Major Lazer finally finished, swarms of people head towards the Main Stage for this weekend’s final headliner.

No stranger to the fields of Bramham Park, this is Eminem’s third time headlining the festival; his appeal no less diminished despite the recent lack of new material. Undertaking a mammoth 33 song set that takes in tracks from over the course of his career as well a smattering of covers by the likes of Lil Wayne, Drake and B.O.B, the latter’s ‘Airplanes Part II’ a particular highlight, allowing for Eminem’s nasally vocal delivery to cut through the track’s polished production exquisitely.

Of course, the tracks from later in his career offer up a different aesthetic entirely from those early cuts, and while the likes of ‘Love the Way You Lie’ and ‘The Monster’ benefit from Ebony taking on Rhianna’s vocal parts, it’s the earlier offerings, from The Marshall Mathers LP or The Slim Shady LP that showcase just how far Eminem has come. And though tracks such as ‘Stan’, ‘The Way I Am’ or ‘My Name Is’ elicit some of the weekend’s biggest reactions, there’s much more time spent on the more recent, ‘serious’ material, that which has gone on to prove Eminem’s career encompasses much more than quick flow and controversy.

Despite the huge set-list, his encore comes around all too soon and somewhat fittingly, ‘Lose Yourself’ garners the biggest reaction of the day. As Eminem tells the crowd that “We’ll always remember this show”, it feels like anything but a cliché.

From the get go the place is packed with people waiting for the first signs of movement on stage. Kicking off the proceedings are the quirky outfit Grey Wind who smash it and get the crowd engaged as much as possible for the forthcoming emo kings. The only thing I wanted to hear more of was some backing vocal harmonies to support the already strong vocal of Steph O’Sullivan. Winter’s Passing take to the stage next, their sound engineer appearing to doze off as the levels don’t seem suited at all. This persists all the way through their set but the songs still manage to shine through and we can see their song writing abilities are on top form. The call-and-return vocals between to the front two are great and the intricate guitar work adds to make their band’s sound something to keep your eye on.

With the support over it's time for Moose blood who hit the stage full throttle. I’ve heard their new single ‘Honey’ in the past few days and didn’t really feel too strongly about it at first. Until I heard it live that is… It’s brilliantly catchy and judging by the crowd’s reaction to it’s a sure fire winner. A few crowd-pleasing oldies get chucked in after words by way of 'I Hope Your Missing Me’ and ‘Cherry' sending the crowd wild. There seems to be nothing this band can do wrong and the crowd seem to hang on every word Eddy Brewerton say’s, singing at times louder than the frontman himself.

By the time final song ‘Gum’ is played, you really get the feeling that this band could be huge in the coming years. With such a large dedicated fan base already growing and a new album on the way I can see them going far. Who knows what’s coming next but surely for these guy’s it won’t fall short of arenas and world domination. Not only that but they’ve already announced tickets for another Euro/UK tour later this year so if you missed out this time, then get your arse in gear and buy some tickets.