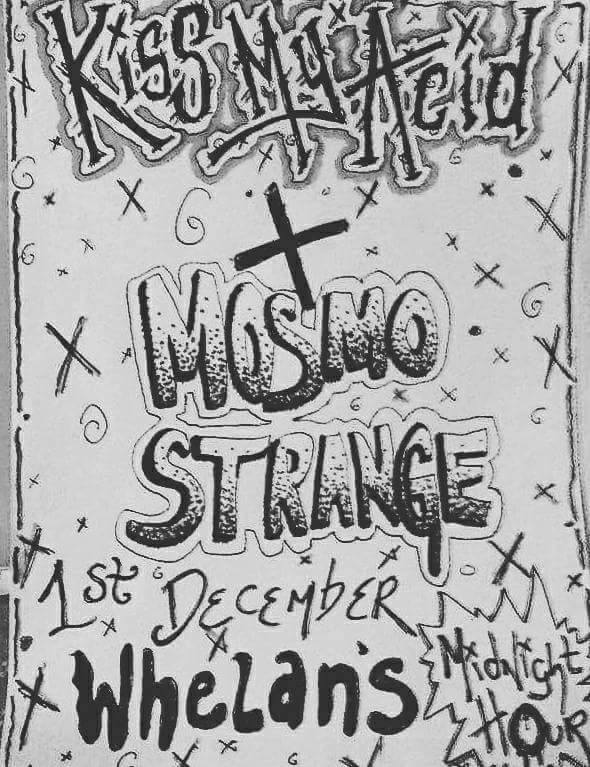 December starts with a roar when Dublin punks Kiss My Acid and Belfast stoner troupe Mosmo Strange feature in The Midnight Hour in Whelan’s of Dublin on Thursday December 1.

Founded in 2015, Kiss My Acid are heavily influenced by Green Day and numerous other American punk bands. Foxboro Freda (guitar/vocals), Rick Wright (Bass) and Tom Ryan (Drums) have made a big impact in a short time with a plethora of shows around Ireland and the UK. Their debut EP, Individuality, is available here.

Mosmo Strange are a four-piece from Omagh in Northern Ireland. What began as a songwriting project for founding members Gavin Scott and Nolan Donnelly, has come to life with the addition of Eamonn Doherty (bass) and Conor Bradley (drums). Their combination of pop songwriting and heavy guitars comes across like Kyuss jamming with Wheatus. Sample Mosmo Strange for yourself here. 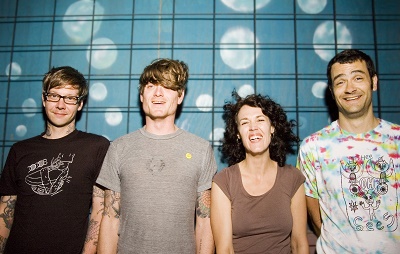 The booking of San Francisco garage/psych band Thee Oh Sees at The Coronet was a surprising one – an old theatre tucked away in a corner of the Elephant and Castle roundabout, its pedigree lies more in drum n bass events than distorted guitars and dual drum kits. However it did offer me the opportunity to go to a gig in London without having to plan public transport, a rarity that any capital-based gig goer will appreciate. This resulted in a slow meander to the Rockingham Arms rather than a panicked rush across the city in multiple sweat drenched underground metal containers. For those who haven’t had the pleasure, the Rockingham Arms is a branch of Wetherspoons which has steadfastly resisted the gentrification taking hold of the rest of the area. Local old men dress up to their nines to head in for breakfast and get steadily more unsteady as the day goes on, I’ve had to change plans when visiting only to find it closed after full scale bar brawls and you’re generally unlikely to find someone drinking a flat white whilst reading the Guardian or updating their blog in there.

A couple of us once witnessed a trail of bloodstains which led from the nearest subway entrance across the path, through the open door and all the way to the bar; random beauty found in the ephemera of violence. Tonight, however, is a mellower affair; the pub is rammed but the mood seems to be a good one. It seems surprisingly free of gig-goers as well, until a glance across the roundabout reveals that everyone is already queueing up. I’ve rarely seen a line this long for a gig that hasn’t been for some big name at the Brixton O2, where you can often see crowds snaking right around the block. This one semi-blocks both entrance and exit to the Elephant and Castle Northern Line, a sign of just how revered a live experience John Dwyer’s troupe have become. We nurse a couple of lagers before entering, thinking we’ll grab some more at the bar; which turns out to be one, as a fiver for a warm can of Carlsberg is something that even someone such as myself, hardened to the cutthroat world of the London gig bar price, can’t really stomach.

“It’s alright though, the feeling of slowly melting brain cells being annihilated by hydroponically grown South London skunk should see me through the evening”, I think as we sip gently at our beers like they were the finest champagne money can buy. We aim towards the front as the band mirror us, taking to the stage with little fanfare. Rock and roll histrionics aren’t necessary when the music does the talking this well. Actually getting to the front however – or even beyond the steps down into the area which constitutes the back of the front – proves basically impossible. Someone has clearly overestimated how many people can actually fit into the dilapidated building and it is very nearly impossible to move. We head upstairs to the top balcony where, despite the band being a distant wall of noise and the lights being close enough to have us drenched in sweat just sitting down, we are able to move our limbs as and when is needed.

Luckily the sound is still spot on way up in the rafters, because there is no faulting the band’s performance. As mentioned before, crowd interaction is left to the music itself and no-one is complaining because the band’s adventurous brew of garage rock, psychedelia, punk, noise rock and whatever they feel like at the time communicates their message perfectly. John Dwyer stomps and points his guitar like Angus Young, Tim Hellman’s bass swirls in and out of the mix whilst simultaneously underpinning the group’s more tripped out moments and the dual drum assault is frankly mesmerising. Watching Ryan Moutinho and Dan Rincon from our vantage point, as they hit every beat at the exact same moment, manages to send me into a zoned out state lying between meditative and cauliflower on more than one occasion. I am bought back occasionally by jarring bursts of feedback, by the group revving into a heavier moment, and by random flashes of concern over what would happen if a fire broke out, or a gig-goer suddenly turned zombie and took a bite out of their next door neighbour. A building this crowded would be prime Walking Dead territory and shit would get gnarly in no time.

The group are doing a good enough job of keeping aggression levels high on stage anyway, with moments of tense, pent up quiet giving way to pulverising heaviness which keeps the audience on their toes. Who needs a zombie apocalypse when you have a wall of sound trying to rip through your aural canals? The set keeps us rapt for some time, but as the encores begin we decide to make a head start on the crush for the exit – a brilliant live set, but the venue choice definitely left a little to be desired…