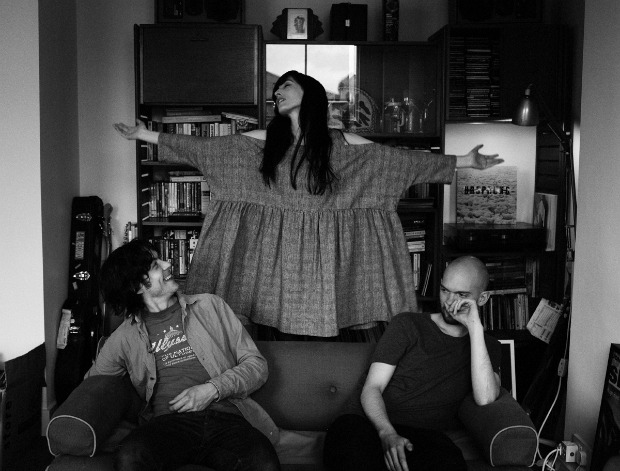 Sian Ahern describes her voice as “an instrument” rather than a outlet for narrative in Eaux songs, and this blurred distinction between the mechanical and the organic is at the heart of much of the output of the London-based trio. Despite being associated with a mind-boggling number of adjectives and portmanteau genres in the music press - apart from ‘electronic’ - Eaux try their hardest to not be pinned down. Indeed the only aspect the songs from their new album Plastics have in common, is a building of layers of rhythm and instrumentation one on top of the other throughout a song, and a deep, rolling crescendo, borne out of the fact that these songs were created in jams, hours of playing together crystallised into five minute songs.

A three-piece on a tiny stage in Dalston’s Birthdays, Ben Cross to the left with a guitar, Ahern in the middle on a drum machine and Stephen Warrington to the right on synths, the night begins with a heartbeat over the speakers and shimmering leopard print projected on the back wall. A gradual build of the beat over the course of each song climaxes not in a chorus, but instead in static, as machine-sounds jostle about with Sian’s vocals and fall about against each other - a beat underneath an arpeggio, an arpeggio underneath a chord, a chord underneath an echo. Ahern stands onstage, eyes closed in the light, cranking the reverb up to create a thousand ghost Sians in the background, twisting around each other.

Despite crackles and loops humming like monitors in a hospital ward, there is a level of human feeling in the songs from Plastics, not within the lyrics (which are almost like sonic texture rather than words), but within the songs themselves. Watching the crowd bob up and down, it is obvious that this is dance music - ‘Peace Makes Plenty’ is Donna Summer anti-disco, in which Ahern’s Kate Bush howl becomes a proto-house version of the seventies club scene - but at the same time as Eaux convinces their audience to move, their music also instills in its listener a sense of dread. Particularly with the ebb of Cross’s malevolent bass that forms the tide of ‘Sleeper’, one has the uncanny feeling that the notes are just the beginning, that something is approaching. Every time another part gets dropped in, a song that starts as dark techno gradually segues into baroque electronica before finally descending into noise.

Although watching Eaux working with their machines is a bit like listening to Google’s DeepMind conducting an orchestra, the lines between the biological and the organic are hazy. Although it’s digital music, Eaux don’t bother with laptops. Even Hans Lo’s audio-visuals are strikingly analogue, projecting wobbling patterns onto the back of the stage with a projector. On this day in June 2014, on which a computer has passed the Turing test and been mistaken for a human, Eaux are a reminder that whilst electronic programmes are making leaps to close the gap between a system of circuits and sentience, humans are on their way to absorbing that technology to create human music that effectively mimics the blurred line between the two.