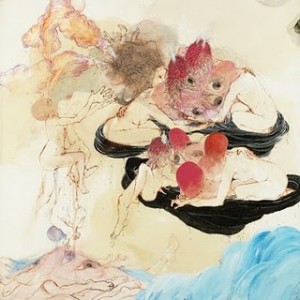 Baltimore “post-wave” synth-wielders Future Islands may not walk with us through entirely original pastures – their woozy ever-so-slightly elegiac sound has been likened to of New Order, the Postal Service and general lost 80s dreampop - but that doesn’t prevent this, their second full length album, and their first with the Thrill Jockey label, from being one of the most surprisingly lovelyreleases of 2010 so far.

After listening to the band’s debut full-length, Wave Like Home, it comes as no surprise that threesomeSamuel T. Herring, Gerrit Whelmers and William Cashion met while in art school. The album wasa lo-fi, starry delight awash with warped despondence, albeit at times somewhat predictable, with each song building from the same fuzzed-out structure and sentiment. But from the gentle, lapping euphoria of ‘Beach Foam’ to the rather glacially sweet ‘Little Dreamer’ it would be fair to say it was an impressive, if not startlingly diverse first effort.

In Evening Air, however, is an instantly more concise and consistent body of work - brighter, cleaner and twice as elegant. And the band’s position amid their peers is palpable from its very first spin. Innocent ambience reminiscent of High Places and Beach House’s ‘Norway’ whispers, sighs and breathes in the silky folds of the instrumental title track and in ‘Swept Away’, amid unmistakeably New Order guitar lines. But it’s the familiar, celestial chimes of MGMT that can be heard on opener ‘Walking Through That Door’, and which take the listener by the hand into the blanketing warmth that radiates throughout Future Islands’ world.

Ultimately, there’s something very cosy and comfortable about In Evening Air and this has much to do with the grizzled yelp of front man Herring who happens to possess a voice that sounds like it’s fighting its way through tears or has been spewed forth from a throat that’s been gargling broken glass and Wild Turkey. Inexplicably, his gruffness has a calming, world-wise and trustworthy quality - like a flea bitten stuffed bear you can’t bring yourself to throw away or like greeting an old friend. The scores of writers who have likened his gravelled bark to Tom Waits, or even the sea captain from The Simpsons, are spot on, but it’s the startling frankness and delicacy, even vulnerability of emotion displayed in this rough-around-the-edges voice that catches you off guard.

Take lead single ‘Tin Man’ (already revealed by the band to be about Herring’s last relationship) with its cascading, crystalline steel drums and instantly accessible air of nostalgia. Using The Wizard of Oz as a fitting metaphor for lost love and having to find a new heart when your own has been ripped to shreds, Herring growls; “You couldn’t possibly know how much you meant to me” before referring to his ex-partner as a “scarecrow” and himself the “tin man”. “And the heart’s not inside,” he whimpers as pealing chimes convulse in a storm of distorted feedback drenched in reverb. “I’ve got to find the one who’s just right. I am the tin man.” Similarly, the charmingly forlorn ‘Long Flight’ is also about the breakup of a relationship, with Herring raising his anguished voice to howl “It’s cos you needed a hand” above fluttering keyboards and rumbling bass.

Last track ‘When I Fall’ is a fitting finale, sleepily tailing off into the ether, the wistful instrumentation finally in harmony with the raw, throaty vocals rather than at odds with them. Musically, it’s the most fragile and least upbeat track on the album meaning In Evening Air ends with a murmur rather than a bang –the perfect way to end just over thirty mins of poignant ruminations. And after all the band’s soul searching we can only hope Herring has found his inner peace, but if not at least he can relax in the knowledge that in this record, Future Islands have made something emotive, moving and really truly very special.