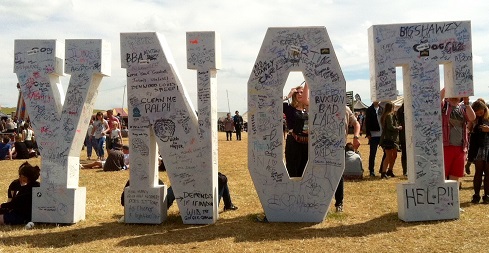 There's something uniquely liberating about the first evening of a festival; inhibitions are cast off and comedowns are yet to set in; respective sites aren't yet sullied by beer cans and half-eaten burgers, and the toilets aren't something you enter at your own risk. It's a rare twelve hour window where people still look and smell their best and there's no-one wandering around pallid and sweaty, bedecked in a sleeping bag whilst trying to shake off last night's Jager haze. Couple this with the rural idyll of Pikehall in the beautiful Peak District, not to mention a couple of quality opening bands, and Thursday's at Y-Not Festival are an absolute winner.

With tent successfully pitched and armed with a bottle of gin and tonic, we decide to explore this year's site, heading roughly in the direction of the Quarry stage for Thursday night headliners, Ash. Though little has changed in terms of the size of the festival, its scope has increased noticeably since last year, with The Octopuses Garden offering more in the way of stalls and small stages. With nothing on offer yet however, we head to The Quarry and arriving to an already heaving tent, decide to watch from the periphery, perched on the side of a giant sea turtle.

Providing us with a 15 song strong set, they play what proves to be one of the longer sets of the weekend, taking in tracks from across their career and most likely turning on host of younger punters on to the joys of their pre-'Burn Baby Burn' material. Folk-punker Beans on Toast meanders past at one point, posing for a photograph with a couple before asking if they had any weed, perfectly epitomising the type of festival Y-Not is - the kind where bands can wander around freely without being swamped with autograph requests, comfortable enough to ask strangers for a smoke. Ash finish up with an excellent double-header of 'Girl From Mars' and the aforementioned 'Burn Baby Burn', closing the first night of the festival in fantastic style. Making our way back to the tent it's clear that people are already in well in to the spirit of things; The Octopuses Garden now throbbing with good vibes and basslines whilst Sgt Peppers Meadow hums with sound of bumper cars and a rollerdisco. We opt for an early night however, knowing full well that a clear head will serve us far better tomorrow than a dry mouth and bleary eyes.

I’m standing roughly in the middle of the floor, we’ve been warmed up by Katie Collins, Vish Amarasinghe and the wonderful Benjamin Folke Thomas. We’re in a good place.

When Beans On Toast gets on stage, the atmosphere is honey-and-melted-butter-warm. This is a hero’s welcome: it’s like a homecoming party which is particularly interesting because Beans' home is back east in Essex.

It’s really all about the lyrics with the guitar (named Martin) a means of carrying the message – think of it like Royal Mail but back when it was publicly owned. If there’s a way to describe the content of the set, it’d be this: part political manifesto, part music gig, part drug truth and part love story. However the facts are well and truly over-ridden by an atmosphere that I've never felt at gigs before. And this does not dwindle, sometimes it increases, for instance when Beans gets down into the crowd to sing; when he berates members of the audience for filming rather than watching and experiencing the gig; when he lets us in on “secrets”; and something even better which I’ll end on.

He is a magician in Nineties clothing, a street prince and he is captivating and beguiling, childlike and a man all at once. There really is such a lot of love in this barn (sounds a bit like Christ). With some acts you’re very much aware of structure and place – it’s a gig, it’s going through the motions. Beans is all about the connection. It’s all about getting across simple but lost messages that we should be good and honest to each other and find value in what is really important.

Nattering, bringing it down to the crowd means that Beans’ messages sink down and you feel them good and proper. You feel included in some cosmic secrets (‘Orange’) about the mistreatment of nature and our fellow man as well as love and drugs and it really makes you wonder why we just can’t all get along, lovingly illustrated by the song ‘The War On War’. The happy-go-lucky timbre of Beans’ songs is the spoonful of sugar that makes what could be quite hard to swallow political angst, go down. He apologises for talking so much – but he knows we love it. Several times he asks us if we want him to be honest with us. Of course we say yes. I won’t tell you what he told us, you’ll have to go to the gigs.

I expect drug songs on the night and complete advocation of them, but their role is small, much to the chagrin of some of the audience – bless ‘em. However, Beans really knows how to work a crowd and they love his honesty in that he says a lot of it was great and he wouldn’t change it but “I’ve had my fill” which makes everyone laugh. When he sings, ‘MDMAmazing’ with such conviviality and without regret I believe him. One thing you do feel is that he associates drug culture with positive human emotion and togetherness – peace – that society seems to be losing. And against this he berates modern culture and social networks for undoing real human social interactions.

Although the politics matter, as do the drugs, this actually boils down to a love story. The show ends with a special song. We’re all blissful like bees supping on jam and perhaps its because the man on stage is in love? She’s had a mention here and there and he’s clearly so proud to be able to end on her. She really is where it stops:

Some artists and bands are noticeably different – if not worse – when live. Beans On Toast is made for live shows and if you are going to experience the delight, and I urge you to, then catch him for real and in the flesh. Buy an album, buy all the albums but only as a reminder of the cracking night you’ve had, a night where you were at the best party and it was the best party because the music is happy and the words are true and the singer is in love and so are you – a little bit.