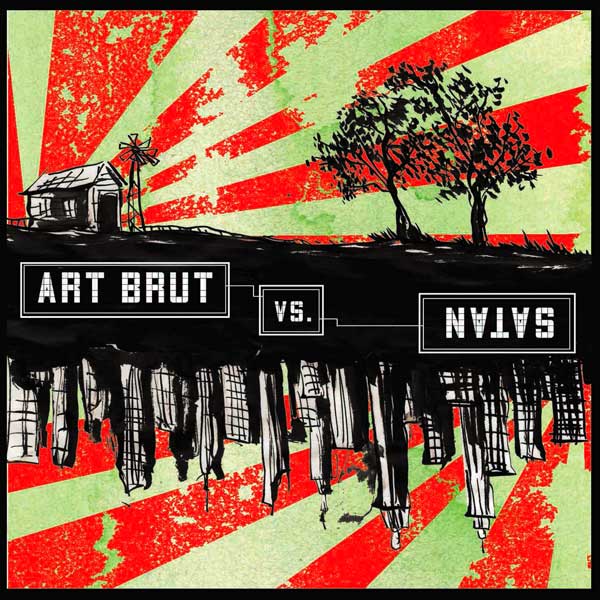 I have long held a fondness for Art Brut - back to when I saw them supporting the man who made being cruelly overlooked an art form, Luke Haines with The Auteurs in November 2004. I'd got to University and London for the first time about two weeks previously, and had no idea where Islington was. I had been unable to drum up any enthusiasm amongst my new peers to go and see the gig; they hadn't heard of the Auteurs (suffice to say I'm not in contact with them anymore), so I went exclusively with people from my hometown and, knowing me, was probably trying to pretend I knew London like the back of my masturbation implement of choice. We got lost.

By the time we got in, the support act had started and everyone was exchanging slightly bemused looks. The drummer was standing up instead of sitting down like the usual moistly glistening mound of skinslammer most bands relegate to the darkness at the rear of the stage. The guitarists were falling over and pissing themselves (not literally). And the singer- well, the singer wasn't a singer. He was shouting and pacing up and down, looking like what he was saying were the most important utterances since God warned Adam away from his orgasm-apple tree. It just worked.

We argued before Luke Haines came on - I insisted that 'Rusted Guns of Milan' was a touching and intensely accurate masterpiece of the terrors of fledgling sexual experiences. My friends said it was an extended ejaculation joke. I maintain the two aren't mutually exclusive. Anyway, I was hooked, and followed them through their slightly repetitive but otherwise fantastic debut Bang Bang Rock and Roll, and their slicked-back masterpiece It's A Bit Complicated ignoring the usual criticisms levelled at them: the music's just boring straight-ahead rock, he just repeats stupid slogans, there's no real wit or intelligence there. So I similarly ignored the first negative reports I heard about their latest, Art Brut vs. Satan. Hell, it's produced by Frank Black and its title presumably refers to Heavenly vs. Satan, one of my favourite albums ever.

And it starts decently enough: 'Alcoholics Unanimous', while not vintage Art Brut, is peppy and funny enough to open. The opening tracks continue in this vein, dealing with comic books, getting the bus, fancying a girl you're too scared to talk to, cheating with someone you don't even fancy, basically everyday Art Brut staples. The spoken-word (well, more spoken-word than normal) 'Am I Normal?' is funny and moving in equal measure and is consequently one of their best songs, while 'DC Comics and Chocolate Milkshake' has a great melody along with one of my very favourite dry and astutely-observed Eddie Argos lines: "I'm in love with the girl in my comic shop/She's a girl that likes comics, she probably gets it a lot."

But then they get onto music. When they last wrote about music we got 'Nag Nag Nag Nag,' possibly one of the best songs of 2006 - this time we get 'The Replacements' where Eddie tells us he's only just discovered the classic Minneapolis punk band. Over and over and over again. Or 'Twist and Shout' where he explains he's had a song stuck in his head. And that's it. Or even worse, 'Demons Out!', where all the self-deprecating joy of 'Formed a Band' is replaced by possibly-meant-to-be-ironic-but-doesn't-come-across-well snobbery ("The record buying public shouldn't be voting" and "No-one likes the music we write" are the lines that really stick out), and Art Brut turn from the funny guy at the party into the guy who gets you in a corner and yells at you for liking music that isn't unlistenable Scandinavian post doom metal turgid drone-rock. And the way they dub in some some guitar mistakes and background noise into 'Slap Dash for No Cash', a song which extols the virtue of non-glossy music, completely ignoring the fact that the rest of the album is entirely glossy, irritates me to a slightly worrying extent.

This album isn't awful; take the first five tracks and you've got a great EP, but the second side is annoying, pompous and frankly unfunny - criticisms I've spent a great deal of time deflecting from Art Brut. Let's just hope that Eddie Argos focuses on the kitchen-sink subjects in future and doesn't make a habit of singing about music, because if he carries on he may well turn into the Satan his band are apparently against. It's time to forget irony, to forget rock and roll and start talking to the kids again.