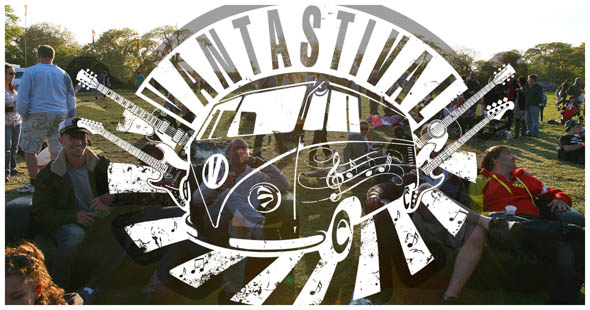 Vantastival is the traditional start to the festival season in Ireland. Even with its move to early June it remains the first proper music festival of 2016. This is the seventh annual Vantastival and there is good reason to believe that it will be the best yet.

They have just announced sponsorship deals with Volkswagen and Firestone, and their relocation to the idyllic Beaulieu House outside Drogheda. Badly Drawn Boy, King Kong Company and The Hot Sprockets will headline on Friday 3rd and Saturday 4th June while the likes of Sample Answer, Saint Sister, Jinx Lennon, Saramai, The Bonnevilles, Swords, and a whole host of local acts from Drogheda and its surroundings will be given the opportunity to perform.

We spoke to Vantastival organiser, Benny Taaffe, about the challenges of staging an independent festival.

We approached them in the past when we were much younger, in our first or second year, but they didn't seem that interested at the time. The people that we were speaking to in their marketing department, we were probably flying a bit too under the radar for them. We reappraised it and went again at them this year. Our profile has built over the seven years and now they see some benefit in associating and we're delighted to have them on board. For us it’s the perfect partnership. The field is full to the gills with classic VWs. It just seems like the logical sponsorship partner to have. We're delighted with it.

And that's helped you get Badly Drawn Boy for a headliner?

Again we've been after him for a while and it's the first year it's worked out with his availability and stuff. Delighted to have him. Anyone who was in college about 15 years ago, like Louise and myself, every single student flat you went in to had the Hour of Bewilderbeest album and Badly Drawn Boy tunes on guitar at every party. It's a headliner that has been always coming. It proves to ourselves that we're getting to where we want to be. It's so good to have such a well known and well respected artist on board. He's looking forward to it.

We started out with Irish headliners. Our focus has always been to showcase up and coming unsigned Irish music. That's what we've focused on over the past seven years. Our past line ups have had bands starting out with us who have gone to great things. That's how we see our role, it's to foster new talent, give bands a break. The likes of Riptide Movement got their first ever festival slot with us back in 2012. The Young Folk, who are back this year, got their early breaks with us. It's one of the last open submission policy festivals around, where any band in the country can apply. And we listen to them all and pick a good line up from that.

You're moving venue this year to Beaulieu House.

It’s a beautiful venue. After four great years in Bellurgan we got absolutely eviscerated by the weather there last year. The frailties of the site became apparent. We couldn't stay there and run the risk of being washed out of it again. We were looking topologically where it was going to be a bit drier even in the event of a downpour.

Also we're that bit closer to Dublin. We had pitched the festival as straddling the Dublin- Belfast axis from the start. The May bank holiday weekend was also a bank holiday in the UK so we were hoping to attract a strong contingent from the north but it never really materialised. The border is still there psychologically if nothing else. By moving closer to Dublin we're consolidating our current base, which is North Leinster in the main.

We've had quite a few campervans over from the UK. Myself and Lou go way back, heading over to the bigger camper festivals in the UK. Vantastival is slightly different in that it focuses more on the music side of it than on the campervan side of it. The campervan is a theme but we’ve been to a few where they focus on the machines to the point where the music is secondary. You get covers band and the music wouldn’t be great. Whereas with us we focus on quality original music. That’s what we're for.

And you've changed the format and gone to a two-day.

That’s a temporary change really. We hope to be back up to a three day format within a year or two. It’s just that we got so badly hit last year that to continue the festival we had to take a chainsaw to the budget, and putting it down to a two day is one way that we can save a pile on security and production costs.

Also the kids, we have two young kids so until we get those off to school. It’s just the time really. The time spent organising. It is just myself and Louise that are the main organisers. With the kids still at home it makes sense for us to cut our workload for a few years, concentrate on getting them ready for school. Then hopefully we can devote more time to it.

It’s all about building the base. We've never turned a profit. So hopefully over this year and next year we can get some money in the kitty to take on someone with us to help with the organisation when we go big again.

Did yourself and Louise have backgrounds in doing festivals before you started this?

We did. We met on the festival scene. I was on construction crew from the early days; the Witnnesses, the Oxegens. She was on admin crew, office production crew. Over the years we got to know each other. We've worked a lot of festivals together in Ireland and abroad. We've both done Glastonbury, Leeds and Reading. We’ve both been over to Burning Man helping out there. We're festyheads. That’s how we hooked up.

You can tell that by the way the festival is run.

Thanks, we try. Even though we got two great sponsors this year in Volkswagen and Firestone/ Bridgestone tyres, we're trying to not let it affect the format of the festival. We're trying to keep the corporatisation of it out. Volkswagen have been brilliant in that regard. They're letting us deal with all the aesthetic. All they are providing is the finances to pay for that stage.

We're delighted that we're not having any creative control wrestled from us. We will still run it as a ‘Bring Your Own’ event. Over the years we've turned away big corporate sponsorships to try and maintain that sense of camaraderie and community that we see at events on the production and build side. Electric Picnic have managed to maintain that vibe but the bigger ones have lost it altogether.

It does have a real family atmosphere as well.

When we started the festival there wasn’t a sign of kids from us but we recognised that, with the campervan theme of Vantastival, the campervan is the only holiday option a lot of young families without a lot of disposable income can muster. We wanted to showcase events that would provide for that. We needed to have a strong family friendly ethos. It’s been with us since day one and its something that we really do value. You see happy families bouncing around the place it really adds to the vibe. Kids exploring, all the van owners gathering and their kids becoming friends. Year on year, they find each other. They start little gangs. Kids that have been there since they were three or four are now 7/8/9, and still with us. It’s their annual holiday. They all get to hook up and you get marauding gangs of eight year olds going round having the craic. It’s great to see.

It was horrendous last year. Everyone was confined to quarters. But a bit of June bank holiday weather, we're usually finishing the clean up around then, and it’s always been glorious. So we can rely on a bit of sun. Last year was bad but even before that the May bank holiday was overcast and grey. What we need is a really good sunny bank holiday weekend to get everyone back in the mood.

With the change of venue too, we'll be very close to Drogheda so we're hoping for a strong show of support from the locals on the Saturday with day tickets and that. We were very downtrodden and negative after last year’s event but over the winter we've had time to take stock. Everyone involved, myself, Lou, and the rest of the crew, are really positive and optimistic about this years event. We're looking at a fresh start. An opportunity to put the misery of last year behind us and push on.

It’s great to hear you talking about next year and continuing it because you’d be sorely missed.

We’d have a lot more free time but we wouldn’t know what to do with ourselves. We’d have to go and get real jobs.